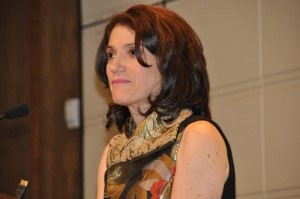 It’s not every day that one gets to sit down and talk with a woman who has pretended to be a nurse in an Afghani hospital to get the story of a rape victim; who has interviewed criminals imprisoned for an attempted coup; or sneaked across enemy lines in the midst of a raging war, just to tell a story.

Thanks to Trustee David Mgrublian ’82 P’11 and the Center for Human Rights Leadership––under the direction of professor Edward Haley––students at The Claremont Colleges were able to do just that when journalist and documentary filmmaker Carla Garapedian visited the Athenaeum on April 25.  Her presence was aptly timed: The day before her arrival marked the 98th commemoration of the Armenian Genocide in Turkey, and her firsthand experience with the survivors of this atrocity made for a chillingly personal understanding of the conflict.

Bojana Bozic, a CMC junior, expressed her excitement as she awaited Garapedian’s talk:  “I've worked on a project for the Center, researching genocide,” she explains, “so this is an amazing opportunity.” Another student attended because he had watched one of Garapedian’s award-winning documentaries and wanted to learn more about her work.  I was lucky enough to sit down with the filmmaker, and discover the story behind her successful career.

Born and raised in Southern California, Garapedian says she knew her future involved an unconventional path. As a young girl, she was determined to go into international journalism. By the time she was old enough to start college, she made a deal with her father: for the first two years, she would go to the local journalism school he worked at, then transfer anywhere she wanted.

True to plan, as soon as her second year was finished, Garapedian transferred to the London School of Economics’ school of international relations. “I knew I wanted to go abroad and see the world,” she explains, “And since I had never learned another language, England was the obvious choice.”

In the end, Garapedian wound up staying at LSE for seven years, eventually graduating with her Ph.D. “They didn’t know what to do with me––how to handle this American who kept coming back,” she says, laughing.

London opened Garapedian’s eyes to the world.  In contrast to the protective isolation of her upbringing in Southern California, London boasted an international population that introduced her, for the first time, to students from Mexico, South America, Africa, and Asia––some fleeing prosecution, and all with interesting stories to tell. “I was not aware as an American citizen,” she says, shaking her head.  “I had to learn about the world. The other students and international relations classes opened my eyes to what one could study.”

The world was a tumultuous place at that time, with the disintegration of the former Soviet Union, the fall of the Berlin Wall, and the omnipotent specter of the Cold War.

“So much was going on in the world, all you had to do was watch,” she says. “Seeing the Old World order fall apart was electric and scary. It was not at all clear what the world was going to look like.”

This “electrifying” excitement of current events drove Garapedian to work as a correspondent for NBC television after graduation. She quickly rose through the ranks of journalism, becoming the first American anchor of the BBC World News, interviewing high-level officials including Benazir Bhutto, King Hussein of Jordan, and Colonel Gaddafi of Libya. She would go on to be a producer for the network before changing gears to become a documentary filmmaker, focusing on human rights abuses around the world. Of all her experiences so far, it’s her current work that she likes best. “In documentary work, you have more time to structure your argument and figure out what you want to say. You can make a big impact,” she says.

One of her most famous documentaries centered around the human rights abuses and war crimes levied on the Chechens by Russian armed forces in the second Chechen War. In our conversation, she connected the recent Boston bombings in relation to her experience with this film. As she pointed out, Russia’s intelligence service, the FSB, raised the alarm to the FBI about the two Chechen brothers as suspects in the bombing.

But Garapedian urges us to take this information with a grain of salt.“We’re taking information at face value from a government accused of genocide,” she points out.  “The FSB is the most corrupt organization I have ever encountered. In the past, they have orchestrated bombings of their own citizens and have blamed Chechen terrorists as an excuse to go to war. Is this really a credible source of information?”

Although her documentary on the Russian human rights abuses provides us an important lens into our own current events, her most recent work—as well as her talk at the Athenaeum—centers on the Armenian Genocide. Although last Wednesday marked the 98th commemoration of the atrocities committed by the Turkish Government on the Armenians, its government has yet to formally acknowledge that such ethnic cleansing took place.

Why would Turkey continue to deny this event when there are 50,000 firsthand records of what happened in the Armenian Genocide archived in U.S. libraries?  First, she says, the time of “easy” admittance has passed. After World War I and the repartitioning of Turkish land through the Treaty of Severis, which led to the ethnic cleansing of the Armenian people in Turkey, the perpetrators of these atrocities were indeed put on trial… briefly.

The Malta Trials charged Turks with war crimes and their participation in the genocide, but were never formally concluded. Turkey’s new government struck a deal with British arbiters of the trials to trade British war criminals for the Turks on trial.

This historical context is important. Genocides, Garapedian points out, do not occur in a vacuum. There are discernable patterns, warning signs, and historical events that lead to them. The Armenian genocide is unique, however, because Turkey actively denies what it did. “Denial is the last stage of genocide,” she quips ironically.  The denial has gone on for so long at this point that Turkey fears losing its land and its national identity should it finally come to terms with its checkered history. The fear is so strong in the Turkish government that there is a penal code for stating that the Armenian events were “ethnic cleansing.” Journalists can be arrested for terming the events “genocide” in their reports.

Although these codes are clearly continuing human rights abuses, the U.S. government is also to blame, she says, for enabling Turkey in its continuing denial. Of all of the American presidents, Ronald Reagan was the only one ever to use the “G-word” to refer to the tragedy in Armenia. Why would the United States, self-proclaimed champion of human rights and democracy, ever deny such an event?  Particularly in light of the multitude of evidence housed in our own archives, our continuing refusal to press Turkey on the issue is bizarre.

“We aren’t missing the facts,” Garapedian says, “We are missing the political will.” If we denounce these events as genocide, we are then required to do something about it, Garapedian points out, and this is a commitment that our government seems unwilling to make. Turkey is our friend in the Middle East, a region in which U.S. allies are hard to find, and harder to maintain.

This is, of course, no excuse. “This wasn’t a tragedy, a flood, or an earthquake,” Garapedian says. “We are talking about the crime of the century.”

The continuing denial of the Turkish government, and our own unwillingness to press them on the matter, has already had drastic ramifications: Hitler famously stated, in his defense of his actions against the Jews in the Holocaust, “Who remembers the Armenians?”

The continued denial and clear lack of repercussions may enable further tragedies to occur, as perpetrators see that there is the possibility of getting away with these crimes without consequence.

“This is about a clash between history, politics, and the truth,” Garapedian says.  “The West may use the concept of human rights and democracy, but these ideals must be defended.”

Her own work, defined by a recent Los Angeles Times article as “Documenting Truth in Dangerous Places,” is one step towards this defense. It is now our turn to take our roles as American citizens and promote human rights around the world, working to finally bring this century-long period of denial to a long-awaited closure.