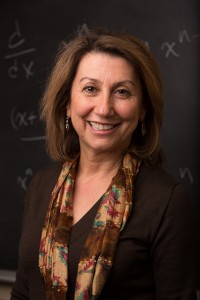 Asuman Aksoy, the Crown Professor of Mathematics and George R. Roberts Fellow, has been awarded a grant from the Mathematical Association of America's Tensor-SUMMA Program. The purpose of this program is to increase the representation of minorities in mathematics.

Beginning next year, members of CMC's mathematics department will be  working on an outreach program designed for middle and high school students. Co-sponsored by the Claremont Center for the Mathematical Sciences (CCMS) and the Teacher Education Program of Claremont Graduate University, this project is called Gateways to Exploring Mathematical Sciences (GEMS). The program was designed to encourage the enjoyment of mathematics among middle and high school students, and to increase the number of students from traditionally under-represented groups who exhibit a high-level of mathematics proficiency.

GEMS sessions take place four times each semester, once monthly on a Saturday morning. A workshop typically begins with a 45-minute presentation by a professor, followed by a 45-minute breakout session, with small groups conducting their own hands-on personal explorations related to the presentation. The goal is to allow each student to understand that mathematics experiences can be fun and process-oriented, rather than answer-oriented. Additionally, the program fosters the notion that mathematics exploration is a collaborative pursuit, which has been shown to be effective in increasing the success of minority participants.

Aksoy notes that “many talented high school students are ‘math injured’. They may have an irrational fear of mathematics, preconceived notions of its nature and scope, and are doubtful of their ability to succeed in it.

"For them to come and interact with our college faculty and students on a project, and thus experience how mathematics is used  ‘in the real world’  is creatively rewarding and intellectually satisfying.” she says. "This kind of program is a great antidote for our anti-mathematics culture, where mathematics is generally seen as the antithesis of artistic creativity. Claremont is a unique place for programs like GEMS. It has more than 60 mathematicians, one of the largest concentrations of mathematicians in Southern California, and also has strong students of mathematics, eager to share their enthusiasm for the beautiful subject of mathematics.”

Aksoy joined CMC in 1987 and has served as the chair of the mathematics department several times. She received her Ph.D. from the University of Michigan in 1984, and her MA from Ankara’s Middle East Technical University. Her central research interests include Banach space theory, operator theory, fixed point theory, interpolation spaces, Orlicz and modular spaces, hyperconvex spaces, and metric geometry.