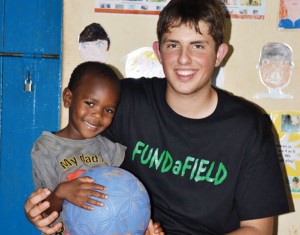 You can understand why a 13-year-old might easily be brushed off for wanting to start a business with global impact. But Kyle Weiss ’15 and his brother Garrett were undeterred as the seeds of FUND-a-FIELD were being planted among friends and family.

“At first people just kind of laughed at us, and then we kept raising more and more money,” Weiss says. “And all of a sudden, we had $36,000 and became an official nonprofit.

The story of FUND-a-FIELD continues to build, as does the nonprofit’s impact. About six months ago, Weiss was interviewed on CMC’s campus for a nationally syndicated program called Live Life and Win!, a 20-minute show profiling inspirational young people who are making a difference. The segment with Weiss and interviewer Madisen Hill was recently aired on Fox, and can be seen on vimeo.com  [try clicking the link, despite the "private" setting]:

The initial pot of money raised by the then-teenage brothers has since snowballed into a sum of about $250,000, which has paid for the development of eight soccer fields for children in Third World countries: two in Kenya, four in Uganda, and two in Haiti. It has also led to some impressive awards for Weiss, among them, receiving the Nickelodeon HALO award in 2011, during a taped 90-minute special in Hollywood that aired across the country. His celebrity match for the honor was David Beckham, with supermodel Heidi Klum presenting Weiss the award during the ceremony.

When asked by Live Life and Win’s Madisen Hill–Why soccer?–Weiss nods. “I know soccer’s not the first thing you think about when you think of helping people in need and in Third World countries,” he explains. “But the thing about soccer is that it’s one of the few universal languages in the world. I can play soccer the same way that someone overseas can play. It’s this universal bonding language.

“We wanted to builds fields in developing countries to help kids recover from trauma, and move forward from conflict, and give them hope they may not have had.”

Depending on how many people will be impacted and how many children will get to use them, each field costs between $10,000-$30,000. Weiss travels frequently to check in on the projects and meet with community members, contractors, and in some cases, political dignitaries. The fields are deliberately built near schools so that it becomes “a community field,” and because soccer fields incentivize children to attend school.

Weiss says he’s been able to balance classes with FUND-a-FIELD responsibilities from his base camp: a computer in his dorm room. With so many communications going to and from Africa, it’s not uncommon for him to be online at 2 a.m., responding to e-mails and managing website sales.