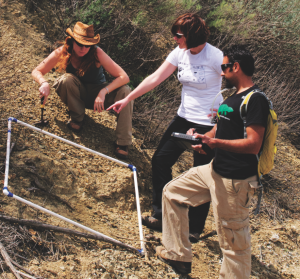 From right: Carlos Pelaez '04, Lauren Harrell '09 and Jess Pelaez in the field.

Global business executive Carlos Peláez ’04 recently founded a nonprofit dedicated to cataloging sections of the Earth's environments. Peláez, who studied economics, accounting and international relations at CMC, has started several businesses and held positions with Deloitte & Touche LLP and KPMG. He started Blueprint Earth almost one year ago with his wife, Jess, a geologist who has studied volcanoes and natural hazards.

Since then, with a network of scientists, students, and professionals with a range of backgrounds and disciplines, they have embarked on their first environmental mapping of California’s Mojave Desert.

Fellow CMCer Lauren Harrell ’09, a doctoral student in biostatistics at UCLA, is also a founding member of the board of directors for Blueprint Earth.

CMC Magazine talked with Peláez about his new startup.

CMC: What ultimately will be accomplished with the environmental mapping? How will this information be used?

Peláez: We will construct publicly accessible databases of information about every aspect of the targeted environments that may be used for research and educational purposes. There are also industry applications, such as in mining where there are requirements to restore the environment after the mining is complete.

CMC: What need does this organization fulfill?

Peláez: This information will be used to increase our understanding of environmental systems and the functioning of those systems. There are currently massive knowledge gaps about the effects that different environmental components have on one another (for example, how does the phosphorus level in these rocks impact the kangaroo rat that lives on them?). Blueprint Earth will create an interdisciplinary framework that will fill in those gaps.

CMC: How can your work help the planet?

Peláez: Our work has potential applications for rehabilitating areas subject to desertification or deforestation, for recreating accurate environments for species that are endangered, and for future terra-forming [modifying environments to make them habitable] projects both on this planet and in space. This is the connection between disparate projects such as DNA banks and the Global Seed Vault.

CMC: Is this a unique venture?

Peláez: It is unique in its scale, its scope, its structure, its mission, and particularly in its interdisciplinary nature.

CMC: What was the inspiration for this organization?

Peláez: The inspiration came from my wife Jess’ work as a geologist and our life and travels around the world. The diversity of environments we encountered during our time living and working in Australia prompted us to formalize our idea.

CMC: What are your long-term plans for Blueprint Earth?

Peláez: We plan to catalog our first environment in California’s Mojave Desert, process and analyze the data, replicate the target environment in a controlled setting (a warehouse), and then repeat the process in as many different environments as possible. This project is extremely long-term, and we expect each environment to require between two to four years of work. Should all go well, we would like to expand our capacities in the future to enable work on two or more environments simultaneously. We expect this project to outlive all of the founders.

CMC: Your first field expedition to the Mojave was in March. How did it go?

Peláez: Going out there for the first time, people had a chance to think outside of their scientific discipline. We’ve heard from participants that they are looking at things in a new light, having had the opportunity to collaborate with colleagues in other fields. Twelve people in total went on the first expedition, including biologists, hydrologists, geologists, and atmospheric specialists. Later a herpetologist and root system specialist will join us.