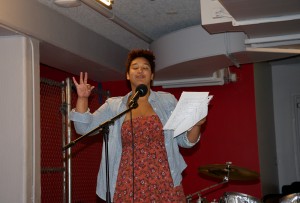 Claremont McKenna students are known for having a multitude of talents and music is often in their repertoire, but space for CMC’s musicians to practice and perform had been hard to find, that is, until the recent opening of The Cave.

The Cave, located in the basement of Marks Hall, officially opened on the evening of September 26, offering a stage for student poets, musicians, and singers to perform in front of an audience. The CMC Art Council planned a full night of entertainment.

Kris Brackmann ’17 and Nick Weiss ’15 introduced the performers by name and sometimes with a fun fact. Students sat down on the many couches arranged in the large room to hear student performances. The poets engaged audience members with their spoken verses. Some related past memories. Some allowed the audience to delve into their personal thoughts. The air was still as the audience hung on to every word. Emotion filled the rectangular room, transforming it into an intimate gathering of friends. Throughout the short transition between poets, more students filed into the room. The couches overflowed, and soon, students had to sit on the floor to listen.

During the music portion of the night, students occupied almost all of the floor space of The Cave. The couches were pushed against the walls to allow more people to watch the performances. The mood contrasted with the initial open mic portion, but the excitement and intimacy of the room remained.

Singers and musicians varied in style, ranging from rap to rock. Some performers encouraged the audience to get up and dance. 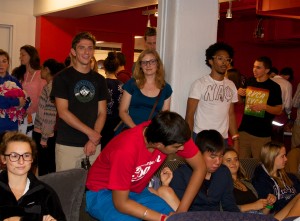 Students at the opening of The Cave, which hosted student performances on Sept. 26.

After the open mic portion, Assistant Dean of Students and Director of Residential Life Eric Vos spoke about The Cave and the process of opening it. He recounted how, over three years, he along with students, trustees, and many other groups and individuals at CMC worked to make The Cave a reality.

Phillip Pennell ‘16, currently studying abroad, came up with the initial plan to open a music space on campus. He developed a plan and submitted it to President Chodosh, who approved it. Pennell then began transforming his plan into something tangible, with the help of other students like Justin Schneider ‘16.

“I had an idea for it,” said Schneider. “But Phil was the one who initially went ahead for the funding. He went to the meetings, talked to the trustees—and obtained close to fourteen thousand dollars in funds for this room.”

Together, Schneider and Pennell purchased guitars, amplifiers, pedal boards, P.A.s, monitors for vocals, and other equipment necessary for a music room. They set up the equipment in the Marks Hall basement with the intention that the renovated basement would be the permanent home for the music equipment and performing space. Now that the Marks renovations are nearly complete, the music room is finally available for use.

Kris Brackmann ‘17, co-host of the night, was pleased with the high attendance. “I was really impressed with the huge turnout of students who came to watch and also the amount that wanted to perform. We actually had to tell people to come back for our next open mic night because there were so many,” said Brackmann.

The turnout suggested that the space will be a popular venue for more concerts and open mic nights in the future.

Cameron Whiting ‘15, a musician and singer, did not have a place for his band to practice. Now, with the opening of The Cave, Whiting and his artistic counterparts have an available space to practice, perform, and express themselves. The Cave opening concluded with a performance from Whiting’s band.

He reflected on the importance of the facility. “It’s fun to finally have an outlet for the musical talent that has always existed at CMC but hasn’t been displayed. Now students are able to comfortably express themselves in a way that they hadn’t been able to before, and I think in a way it gives people a new respect for their peers. The quality of the arts on campus can only accelerate now that there is opportunity for students to be recognized for it,” said Whiting.