From clearing rocks to establishing scholarships, Grantham epitomized alumni dedication to the College 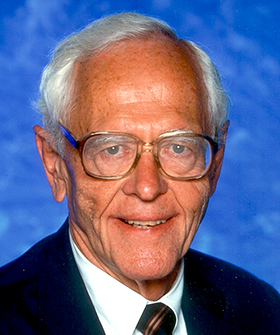 The CMC community mourns the loss of one of its Pacesetters, Richard Grantham, who passed away this month. A member of the Class of 1950 and a Life Trustee, Grantham was 88.

Known as the Pacesetters, the earliest classes of CMCers were the earliest builders of the College -- Grantham and his classmates literally cleared away the countless rocks and large stones on the young campus in a project known as "Operation Rockpile."

That early commitment to building CMC was reflected in Grantham's many subsequent roles at the College, including his service as a member of the Board of Trustees from 1974-2000 and as a Life Trustee starting in 2001. The years of Grantham's trustee stewardship also marked a time of significant change at the College, in particular the transformation of CMC into a coeducational institution in the latter part of the 1970s.

Along with his Board service, Grantham and his wife, Charlotte, continued to support CMC's Pacesetters Memorial Fund, the Alumni Fund, and CMC Magazine, and they established the Richard and Charlotte Grantham Scholarship to ensure assistance for deserving students of limited means.

Grantham is survived by his wife, Charlotte; and by their children Robert, Susan, and Ann; and was preceded in death by his son, Scott.

Those at the College who knew Grantham described him as a very kind, calm person with a firm yet unassuming air. These qualities were important to Grantham himself, who selected the following quote, from the Roman historian Tacitus, to run with his yearbook portrait in the 1950 Ayer: "Reason and calm judgment, the qualities especially becoming a leader."

A memorial service for Richard Grantham will be held:

Grantham's children have indicated that donations in memory of their father may be made to the Richard and Charlotte Grantham Scholarship at CMC.