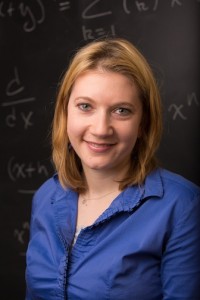 Assistant Professor of Mathematics Deanna Needell has been named a prestigious Alfred P. Sloan Research Fellow in mathematics, one of the top national awards for a young scholar. She is the only 2014 recipient from a liberal arts college.

"I am honored to receive this kind of recognition, and excited to share it with Claremont McKenna," said Needell, whose research interests include numerical analysis, geometric functional analysis, statistics, probability, applications to computer science, and scientific computing.

The award comes with a two-year, $50,000 research grant. Needell was among 126 young scholars chosen from over 700 applicants. Almost all of the 126 recipients are on the faculty of large research universities. Needell was the only liberal arts college recipient.

"The stipend will help with my travel and summer research in the next two years," said Needell. "Collaboration is very important in mathematics and this will allow me fruitful visits with my colleagues and conferences."

According to the Alfred P. Sloan Foundation website, fellows are nominated by department chairs, senior researchers, and other leaders in the scientific community, the Sloan Research Fellows represent the next generation of top scholars in the sciences, economics, and mathematics.  Since 1955, when the program began, 42 Sloan Research Fellows have gone on to win Nobel Prizes, 63 have been awarded the National Medal of Science, 16 have won the Fields Medal in mathematics, 13 have won the John Bates Clark Medal in economics and hundreds have received other prizes, recognitions, awards, and honors for their research accomplishments.