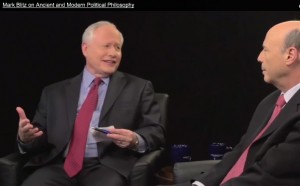 Mark Blitz, the Fletcher Jones Professor of Political Philosophy and director of the Henry Salvatori Center at Claremont McKenna, was a recent guest on Conversations with Bill Kristol, a video discussion series between the Weekly Standard editor and leading thinkers.

Blitz, a scholar whose expertise includes public policy, American foreign policy, international relations, and the Middle East, talked about his newest book, Plato's Political Philosophy, but the talk covers a number of other topics, and is split into nine sections: Plato’s Political Philosophy; The Ancients and How We Live Now; Character Virtue in Aristotle; John Locke’s America; Hegel and Marx; Liberal Democracy; The Allure of Nietzsche; Studying with Harvey Mansfield; and Teaching and Practicing Politics. Watch them here.

Blitz (A.B. and Ph.D. from Harvard University) is chair of the department of government at CMC. He served during the Reagan administration as associate director of the United States Information Agency, where he was the U.S. government’s senior official responsible for educational and cultural exchange, and senior professional staff member of the Senate Committee on Foreign Relations.

He has been vice president and director of political and social studies at the Hudson Institute, and has taught political theory at Harvard University and at the University of Pennsylvania. He is the co-editor (with William Kristol) of Educating the Prince: Essays in Honor of Harvey Mansfield; and author of Duty Bound: Responsibility and American Public Life; Heidegger’s Being and Time and the Possibility of Political Philosophy; plus many articles on political philosophy, public policy and foreign affairs.