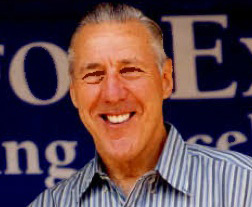 Many children have dreams of becoming firefighters, ballerinas, doctors, or teachers, but when Allan Klumpp ’53 was a boy, he wanted to become a mechanical engineer. That boyhood fantasy turned into a career that helped propel the dream of a nation.

A precocious child, Klumpp discovered his love of engineering in the backyard of his childhood home in La Cañada Flintridge. In response to the severe flooding of the Los Angeles River in the 1930s, he built his own flood control channels to copy those being constructed around Los Angeles.

“I asked my mom,” said Klumpp in a recent telephone interview. “ ‘Could you please buy me some concrete so I can build my own flood control channel?’ ”—and she did.

Rather than go straight into studying engineering in college, Klumpp first enrolled at CMC to study engineering and business.

Klumpp transferred to MIT after two years at CMC (where he annoyed his classmates by receiving the only A-grade in a math of finance course, thereby ruining the grading curve), and graduated from MIT in 1955 with a B.S. in mechanical engineering.

After graduation, Klumpp took a job with Douglas Aircraft and developed the control systems for Navy planes.

After two years at Douglas, he returned to MIT to study for his master’s degree. It was then that he received what would turn out to be the offer of a lifetime. The California Institute of Technology’s Jet Propulsion Laboratory was given the task of developing the nation’s newly-funded lunar and planetary space program, and they wanted Klumpp’s help. He started out working on the Ranger program, which sent unmanned spacecraft to photograph the surface of the moon and transmit the images back to Earth.

In 1960, he was appointed to a team charged with evaluating and developing proposals “to get a man on the moon.” Using ballistic missile reliability experience to compute the probability of a successful manned trip to the moon and back, Klumpp determined that “if we didn’t improve reliability, we would have a 10% chance of returning each crew safely.”

On July 1, 1963, he joined the MIT Instrumentation Laboratory (later renamed the Draper Laboratory) to work for the “more ambitious” Apollo program. Though determined not to take all of the credit (he is quick to acknowledge that the equations used were derived years earlier by George W. Cherry), Klumpp was the principal designer of the Apollo Lunar Module on-board descent software.

“One person was responsible for each of the phases of the mission,” he said. The orbit down to the surface of the moon, which took 11 minutes, was Klumpp’s responsibility. He says the task was a daunting one because “there was no possibility you could try again.”

Fortunately, Apollo 11 landed safely on the moon and with one giant leap, history was made. “I can’t tell you how many times it has been repeated to me that the sound of the moon landing was ‘Klumpp’ ”

The Lunar Module on-board descent software was used on every mission that landed on the moon. Thanks to Klumpp and his fellow engineers, 12 astronauts were able to set foot on the lunar surface.

After Apollo, Klumpp wrote the preliminary design for space shuttle ascent steering which was used in most, if not all, space shuttle missions. This innovation is what he considers one of his biggest accomplishments.

In 1975, years after the Apollo program had ended, Klumpp was told by his supervisor in the Draper Lab that opportunities in space were declining but he “could always work on weapons.”

Having read that some planes he worked on at Douglas Aircraft were being used to strafe civilians in Vietnam, he vowed to never again contribute to weapons systems. He opted instead to go back to JPL, where he spent the next 28 years developing software for robotic missions to other planets, including Venus, Mars, Jupiter, and Saturn. His final product was the simulator used for designing the landing trajectories for Mars rovers Spirit and Opportunity, both of which landed successfully in January 2004.

On his many years working for the space program, Klumpp said: “There were a lot of people who were envious [of me] and would’ve loved to have those opportunities. It was an opportunity for which I was well-paid, even though I would have been glad to participate for free.”

Klumpp retired from JPL in 2003 after a 44-year career, and though many might think he helped change the world, his work is far from over. He now devotes his time to long-term global sustainability, including finding replacements for our finite energy resources. He has focused his work into specific goals and devised solutions for each problem.

Taking responsibility for human posterity is the running theme of Klumpp’s current work. As for implementing the solutions: “It takes wisdom more than intelligence,” he says.

If Klumpp can help put a man on the moon, he surely can help save the planet.