The fight against a dangerous condition

Brittan Sutphin '14, is a superb athlete (she’s a nationally-ranked tennis player for CMS) and a Biochemistry major at CMC. But she might not even be here if it weren’t for some quick thinking when she suffered sudden cardiac arrest while swimming in a pool in high school.

That incident changed her life and inspired her to lead an organization called Youth Battling Sudden Arrhythmia Deaths (YBSAD).

Brittan also travels around the country giving talks on SAD. Her work in the W.M. Keck Science Department is overseen by Associate Professor of Biology Emily Wiley, and she has also conducted independent research on SAD at the Mayo Clinic. 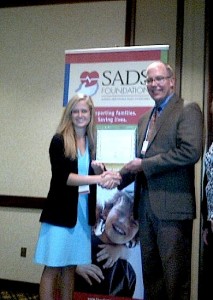 Recently, Brittan attended a SADS conference in Salt Lake City, where she was named Volunteer of the Year (see photo, left). She has also been the recipient of the Hero of Young Hearts Award for her dedication to cardiac research and volunteer work. As a youth advisor for the SADS program, Brittan receives 5-10 emails a week from youth who have survived sudden cardiac arrest, received a diagnosis of heart arrhythmia or who have lost a sibling to the condition.“They turn to me for advice, information and support and it makes me feel like everything I do is worth it,” she says.

Brittan took time out to answer a few questions about her work and how it all started.

CMC: Some quick-thinking first responders saved your life from a possible sudden arrhythmia situation. Can you tell us about that?

Brittan: When I was 16, I joined the high school swim team. Two weeks into the season, I had a sudden cardiac arrest in the swimming pool. My teammate and friend pulled me from the bottom of the pool and onto the pool deck where CPR was started. After about eight minutes, an AED (a computerized medical device that can be used to treat a victim of cardiac arrest) arrived and it took two shocks to restart my heart. I am alive today for two reasons: because there was an AED at the recreation center and there were first responders who knew to get the AED and use it. There are approximately 300,000 sudden cardiac arrests in the U.S. per year:  92% of those die before they even make it to the hospital even though this is 100% treatable with first-responder actions.

CMC: Did that close call inspire you to get involved with YBSAD?

Brittan: Before my event, I did not even know what an AED was, and I was even more shocked to learn that they are not in all recreational facilities. I am a nationally-ranked tennis player, and had I been on the court that day instead of at the swimming pool, I would not be here. My high school did not even have an AED! I decided to found Youth Battling Sudden Arrhythmia Deaths, whose main goal is to raise money for the placement of AED's and raise awareness of SCA in young athletes. We partnered with Kick-Start My Heart (http://www.kickstartmyheart.org/documents/) and the Daniel Lunger Fund who had the same goals.

Brittan: After speaking at several events, I met Tommy Mallon and his mother, who founded an organization call Advocates for Injured Athletes after Tommy survived a neck fracture while playing lacrosse thanks to a first responder, who told him to not move or get up. We realized that both of our lives were saved because of the actions of first responders. ASA works to train high school and college athletes to become those first responders. We strongly believe that the message has to come from other athletes and we are the ones who will be closest to our peers if something happens on the field. More info on the video attached. (The link to our promo video for ASA sent out to potential sponsors:

There is another link (http://www.youtube.com/watch?v=9IbjF_FoMA4&feature=email)  to a very rough first cut of my portion of the training video for ASA: It details information about SCA and what I really want people to know.

CMC: Has your work with YBSAD and sudden cardiac arrests inspired your major?

Brittan: As a biochemistry major, I plan to pursue an MD/PhD at the Mayo Clinic or Columbia researching these heart arrhythmias (Long QT, HCM and CPVT). I did cardiac research at the Mayo Clinic last summer on Sudden Infant Death Syndrome and its correlation to genetic heart arrhythmias, and I plan to return there this summer. I just received this very exciting email this morning from the Society of Pediatric Research where I submitted my abstract:

"On behalf of the Society for Pediatric Research (SPR) and the SPR Student Research Award Committee, I would like to congratulate you on being selected as a recipient of the 2013 SPR Student Research Award (High School/College Student category) for your abstract (Abstract # 754419). Your award will be announced during the SPR Presidential Plenary on Monday, May 6, at the 2013 PAS Annual Meeting in Washington DC. You will be asked to present your abstract in a platform presentation during the PAS session to which it was accepted."

This is by far my most prestigious achievement thus far!

CMC: What is the single most important thing people should know about preventing or combating sudden arrhythmia deaths?

Brittan: The first thing people should think when they see a sudden cardiac arrest is to send someone to get an AED. CPR is great, but it will not restart someone’s heart. Even if that person just fainted from dehydration or fatigue, it is better to have the AED there. An AED can do no harm. If you have an unconscious person and place the AED pads on them, it will analyze their heart beat and know whether or not to shock them.