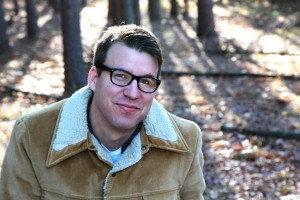 A recent article in The Los Angeles Times may have one of the better summaries of why a novel co-authored by Kevin Moffett remains rare and special more than two years since its publication:

When The Silent History was first published in 2012, it thrillingly demonstrated how an e-book could be both a well-written novel and fundamentally different from a print book… But two years later, look in the iBookstore and there's nothing like it—the top interactive e-books are cookbooks, basically gorgeous instruction manuals, and illustrated books for kids...

The Silent History, co-authored by Moffett, a visiting assistant professor of literature at CMC, and published this past summer as a print book by Farrar, Straus and Giroux, debuted in 2012 as an e-book and interactive app for iPads and iPhones. Former McSweeney’s publisher Eli Horowitz edited the book with Moffett and author Matthew Derby contributing testimonials. The app won a Webby Award in 2013 and a “Best App” award from Apple in 2012.

A literary thriller about a generation of children unable to speak or comprehend language, the central narrative of The Silent History is presented through a series of brief, first-person accounts from people who have had contact with the so-called “silents.” Recorded testimonies are presented from parents, siblings, politicians, doctors, cult leaders, profiteers and others, documenting the growth and outside perceptions of “the silent community.”

Users of the app can not only read the individual testimonials but can also access location-based stories when in that locale, and contribute their own “field reports.” Recent reviews of the print edition, however, confirm that the story holds up well on its own without the interactive elements. Novelist Richard House in The Guardian calls it “a compelling story about difference, rights and power.”

Moffett has published two award-winning short story collections, Permanent Visitors and Further Interpretations of Real-Life Events. He is a frequent contributor to McSweeney’s and his work has appeared in Tin House, the Harvard Review, American Short Fiction, the Believer and three editions of The Best American Short Stories anthology. Among his honors are the Pushcart Prize, the National Magazine Award and Nelson Algren Award.

CMC sat down with Moffett to discuss The Silent History:

CMC: How was the idea for such an interactive e-book hatched originally?

Moffett: It started with Eli Horowitz, who was the publisher at McSweeney’s for a while. McSweeney’s is all about the book as object, as beautiful artifact.  He was seeing the rise of e-books and getting depressed because you were losing a lot of what was special about a book but not getting anything really in return from it. Most e-books are essentially PDFs of books you can read on a device. The idea was to think of a way to create a digital narrative that would in some ways engage with the technology but also read like a book. We wanted something that would take advantage of the technology, charting a slightly new path in e-books, but also be a compelling narrative. Often in experiments like this, the writing is really good but the technology is sort of scattershot, or the technology is really high-end but the writing is just kind of an afterthought. Eli approached Matt Derby and I about the project, both of us having written for McSweeney’s. The digital stuff was interesting to me, but the storyline, these children born without the ability to communicate was, for me, most fascinating.

CMC: According to a review in The Economist: “... [T]he book fits well into hard covers. …[I]t has the energy of an airport page-turner, with the coherence and ambition of a more earnest book.” Was the app meant to lead to a print book?

Moffett: It was originally conceived only as an app. The book is something that came later, almost in reaction to the kind of success of the app, the buzz it got when it came out.

CMC: The emergence of the silent generation in the book and how different people respond to it, is reminiscent of the increase in recent years of the diagnosis of autism. Was that part of the inspiration?

Moffett: That was definitely one of them. I think any good speculative conceit has a lot of different resonances. While working on it, I read a lot of histories of the deaf and the deaf community. In the story, there are devices developed for silent children to help them communicate, and some of the silent community bristles against that, something that was informed and inspired by real-life responses to devices for deaf children, like cochlear implants.

CMC: Explain how the app works.

Moffett: There are two primary components to the app. The first one is the testimonials, and that is what you get delivered to your device right when you order it. There are 120 first-person testimonials written by Eli Horowitz, Matthew Derby and me. The second component is the field reports, which were conceived to take advantage of GPS technology on mobile devices. We wanted to find a way to have little elements of the story scattered around the United States, around the world. Kind of like a scavenger Originally, we asked people to contribute these field reports and assigned some of them early on. Now they’re being written by people who’ve read the story and want to take part in it in some way.

CMC: What was the response? Did you receive good field reports from readers?

We have tons of reports in Australia where there are lots of people really excited about the project, some in Greece, one in China a few in England and Paris. All told, there are over 200 worldwide.

CMC: Do you think this kind of interactive storytelling is going to take off going forward?

Moffett: I do. There have been several interesting new developments.  There’s The Atavist (atavist.com), partly financed movie producer Scott Rudin started to publish digital stories. They’ve commissioned digital books from writers like Karen Russell, Chris Adrian-- lots of really interesting, contemporary writers. I’m hoping there’s sort of a groundswell here because books aren’t going anywhere, but I do think there has to be an ongoing conversation about what we lose and what we gain with an e-book. If it’s just an uglier version of a preexisting book, then what’s the point, why accept that trade off?