“The Army I knew as a child, the one I experienced as a young officer, and the one I left in 2010 were as different as the times they resided in,” writes retired four-star General Stanley McChrystal in his recently published memoir My Share of the Task.

And yet, regardless of how the military has changed, McChrystal has learned invaluable lessons over the course of more than three decades in the U.S. Army.

The retired commander of NATO forces in Afghanistan and the military leader credited for the 2006 killing of Al Qaeda leader Abu Musab al-Zarqawi will share some of his insights with the CMC community during two highly anticipated events next week, sponsored by the Res Publica Society.

How should the U.S. respond to imminent and perceived threats from around the world?

McChrystal will offer his perspective in the address, “The State of International Affairs and the Security Challenges Facing America,” to an audience of Res Publica Society members on March 27 at the Millennium Biltmore Hotel in downtown Los Angeles. That evening, McChrystal also will address students on campus for a dinner event at the Marian Miner Cook Athenaeum. 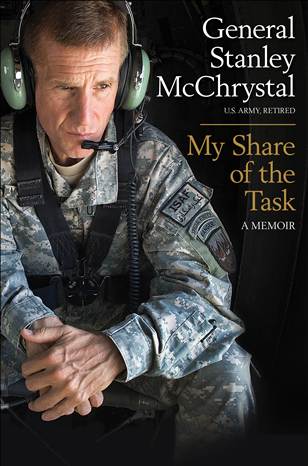 Res Publica Society guest speaker Stanley McChrystal is the author of an acclaimed memoir, "My Share of the Task."

Since his retirement in 2010, McChrystal has gone on to serve on the boards of several companies, including JetBlue Airways and Siemens Government Technologies (as board chair). He returned to the public sphere after being invited by the Obama Administration to oversee Joining Forces, an organization supporting military families.

McChrystal is also a senior fellow at Yale University’s Jackson Institute for Global Affairs and the co-founder of the McChrystal Group, a consulting firm focusing on effective leadership, management and team-building—areas that he knows well from his experiences in Afghanistan and Iraq.

“More by luck than design, I’d been a part of some events, organizations, and efforts that will loom large in history, and more that will not,” he says in My Share of the Task. “I saw selfless commitment, petty politics, unspeakable cruelty, and quiet courage in places and quantities that I’d never have imagined.”

Early in McChrystal’s career as a soldier (his memoir tells us), he was drawn to unconventional tactics. He was attracted to the Army’s Special Operations Forces and appreciated the opportunity, as a Green Beret leader, to develop with the support—but not the micromanagement—of his superiors.

McChrystal rose through the ranks of Special Operations, and just nine months before the terrorist attacks of Sept. 11, 2001, he was made a general. In 2003, he was chosen to run Joint Special Operations Command and had numerous successes—the killing of al-Zarqawi, for example, as well as the capture of Saddam Hussein—which he relates in intriguing detail in My Share of the Task.

His memoir has been praised for its detail and candor by leading U.S. media outlets.

“Modern generals' memoirs are mostly ghostwritten these days and follow a familiar template,” writes Max Boot for the Wall Street Journal, adding that My Share of the Task “is considerably more thoughtful and better crafted than most,” particularly in its details about the 2006 al-Zarqawi operation.

“Too often memoirs by former leaders are heavy on score settling,” says Claude R. Marx for Fortune magazine. McChrystal’s is “short on gossip and long on heft. Readers looking for a detailed recounting and analysis of American military efforts in Iraq and Afghanistan will be satisfied.”

In recent public remarks on the same topic as next week's CMC events, McChrystal has pointed out that this nation's future depends on better communication with the rest of the world. Only person-to-person contact can resolve conflicts, he has said, and that applies not only to individuals but to countries as well.

Interested in attending the Res Publica luncheon? Contact the Res Publica Office at  (909) 607-0037 or e-mail respublica.events@cmc.edu. The dinner at the Athenaeum is closed.