Were they Reich propagandists or true artists?

"Is the notion of Nazi culture an oxymoron?" asks Jonathan Petropoulos in the preface of his new book, Artists Under Hitler: Collaboration and Survival in Nazi Germany (Yale University Press). "Was any 'good' culture produced during the Third Reich?"

Many artists fled Germany in the years of Hitler's rise to power, but what about those who stayed? Did they sacrifice their artistic visions to the cause of National Socialism -- was their art merely a gilded kind of propaganda?

For Petropoulos, who is John V. Croul Professor of European History at CMC, the answer is no.

That answer, however, is more complicated (and layered) than a simple no.  His new book offers what an advance review  in Kirkus Reviews calls "a persuasive, nuanced and surprising picture of German culture under the Nazis."

Petropoulos takes a biographical approach to his subject, concentrating on 10 figures including Bauhaus founder Walter Gropius, composer Richard Strauss, filmmaker Leni Riefenstahl and architect Albert Speer. He divides them into two groups – five who sought accommodation with the regime, and five who achieved it.

Eight years in the making, Artists Under Hitler is the final volume in a trilogy including Petropoulos' earlier books, Art as Politics in the Third Reich and The Faustian Bargain.

Along with this trilogy and another volume, Royals and the Reich: The Princes Von Hessen in Nazi Germany (Oxford University Press), Petropoulos lectures widely on the issue of Nazi looted art and has been interviewed for a variety of documentaries and by major media outlets.

In his new book, he provides an intriguing look into the lives and careers of artists such as architect Speer and filmmaker Riefenstahl, who both nurtured Nazi patronage in order to survive.  Survival means many things, however -- though Riefenstahl claimed her art was apolitical (Petropoulos shows readers the modernist underpinnings of her films), her works also glorified Nazi ideology by merging it with powerful mythic imagery, especially in the film Triumph of the Will: 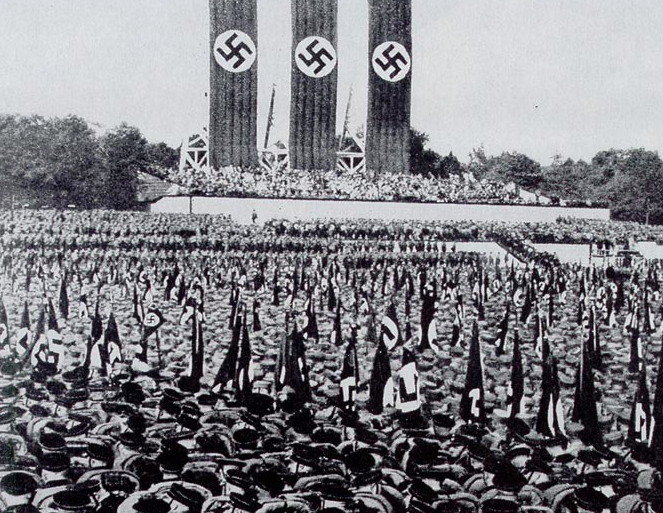 Myth and the masses: A scene from Leni Riefenstahl's 'Triumph of the Will.'

His book also examines those figures who were far more torn over the changing politico-cultural climate of their homeland, particularly  Gropius, whose efforts at accommodation grew increasingly difficult as the Nazi regime grew more radical.

Gropius left Nazi Germany in 1934, using the excuse that he wished to attend a propagandist film festival in Italy. Finding a similarly fascist climate in that country, Gropius went to Great Britain before eventually settling in the United States. 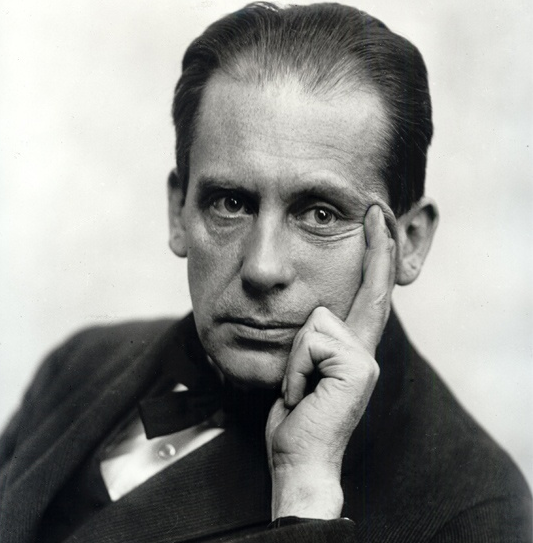 Conflicted about his homeland: Walter Gropius in 1919.

Julia Klein, who reviewed Artists Under Hitler this month in the pages of The Jewish Daily Forward, praises the book for achieving Petropoulos' objective of achieving "a more nuanced understanding" of these modernist cultural figures. His book, the review declares,  "encourages us to look critically at aesthetic and moral choices made under [the Nazis] …and to set aside simplistic notions about the reactionary nature of Nazi culture."

Similarly, William O'Connor in The Daily Beast celebrates the book for adding "some grey to the generally black-and-white conversation about Nazis and art."

Nota bene: Petropoulos and his new book also will be the subject of an extensive interview featured in the winter issue of CMC Magazine, due out after the holidays.