Creating a heavenly kingdom on the Korean peninsula

In his new book Building a Heaven on Earth: Religion, Activism, and Protest in Japanese Occupied Korea (University of Hawaii Press), Albert L. Park, associate professor of history, addresses two primary questions: why and how Korean religious groups responded to growing rural poverty, social dislocation, and the corrosion of culture caused by forces of modernization under strict Japanese colonial rule from 1910–1945.

Based on the study of key Korean religious leaders who sought to combat brutal economic conditions experienced by Koreans (especially peasants) living under Japanese colonial rule, Park’s book shows that religion was not a static force immune to change.

“Instead, it was (and is) something that needs to be continuously adapted to changing conditions in society by reconfiguring traditional religious language, practices and institutions into meaningful and purposeful forces for building inclusive communities and social change,” he said. 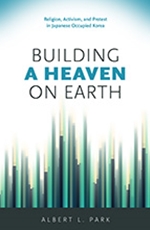 In Building a Heaven on Earth, Park studies the drive by various religious groups to contest standard conceptions of modernity and forge a heavenly kingdom on the Korean peninsula to relieve people from major disruptions in their everyday lives. The results of his study might just reconfigure debates on colonial modernity, the origins of faith-based social activism in Korea, and the role of religion in a modern world.

Bruce Cumings, professor of history at the University of Chicago and author of Korea’s Place in the Sun: A Modern History, calls Park’s book “a concise, well-judged, and deeply informed analysis of two central problems of the Korean political economy during the Great Depression: the agrarian mise-en-scène of high tenancy and general impoverishment; and the global anarchy of a world economy that had fallen apart, with no one knowing how to put it back together again.”

Takashi Fujitani of the University of Toronto describes Park’s book as “pioneering and masterfully researched with many insights into the complex and globally-mediated intersections among religion, modernity, and nationalism in colonial Korea.”

Through its historical findings, Park’s book challenges today’s prominent pattern of subscribing to and not challenging modern-day normative values.

Despite the numerous political, social, economic, cultural and technological innovations in the last couple of decades, a large number of people in the developed and developing worlds hold onto the belief that to become modern requires certain features in society, especially industrial capitalism and urbanization.

“Diversity on many levels certainly exists in many societies, but there is a frequent tendency to not question this idea of how to become modern, especially in discussion of models of modern development in the political and economic realm, or what it means to be modern,” Park said. “This hegemonic way of thinking unfortunately prevents any concrete and meaningful discussions on the prospects of creating alternative ways of modern living.”

But far from being a condemnation of modernity, Park’s book argues that religion empowers a modern form of living by emphasizing the present.

“It explains that religion has value under modernity as it transforms and adapts in order to continue feeding the human imagination, cooperative social development, and the diversity of social living,” he said.

The book also encourages readers to be open to the idea that there should not be one path of development under modernity. “At the time they started their drives to build a heavenly kingdom on the Korean peninsula,” Park said, “religious leaders rejected the popular belief that modernity should be solely centered on industrialization, urbanization, and secularization. They stressed that social development should be sensitive to place in that any type of development needs to respect and work with existing cultures, customs, beliefs, practices and institutions.”

More important, according to Park, the book could help readers understand why people have turned to cooperatives and have searched for alternative economic systems during periods of great economic distress caused by a depression or recession.

In Park’s view, his book (unlike many existing studies) focuses on religious processes in relation to political, economic, social, and cultural developments. In so doing, it contributes to the debates on colonial modernity, the origins of faith-based social activism in Korea and the role of religion in a modern world.

“Though I think the book will be of special interest to people interested in East Asian history,” Park said, “this book could have wide appeal because it is a story about the hope and limitations of creating social movements to establish a new, inclusive world where people are firmly committed to caring and helping one another above all, especially economic interests.”

Upcoming book news: In April and June, Park will be lecturing about his book and Korean history at Harvard, the University of Washington (Seattle), and the Universidad Sergio Arboleda (Bogota, Columbia).