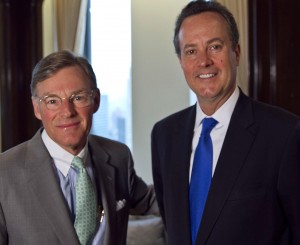 Douglas Peterson (right) was elected CEO and President of McGraw Hill Financial by its Board of Directors on Thursday, July 11, 2013. He begins his new role on Nov. 1, 2013. Harold (Terry) McGraw III (left) continues as Chairman of the Company. Mr. Peterson is currently President of Standard & Poor’s Ratings Services, part of McGraw Hill Financial.

Douglas Peterson to Become President and CEO on November 1, 2013

Mr. McGraw said: “Doug Peterson is a proven global leader with an impressive track record of achievements in his outstanding career. He has successfully led the evolution at Standard & Poor’s Ratings Services since he joined the Company in 2011.  Doug is a seasoned executive with more than 25 years of experience in financial services, including as Chief Operating Officer of Citibank, N.A., which operates in over 100 countries. Earlier in his career, Doug was CEO of Citigroup Japan and Chief Auditor of Citigroup. He also held leadership positions for Citibank in Uruguay and Costa Rica.

“Doug’s strategic thinking and client focus have been evident throughout his career and he brings to the role of President and CEO a distinct combination of vision, thought leadership, global insight and commitment to realizing the great future opportunities for McGraw Hill Financial,” added Mr. McGraw.

Edward Rust, Presiding Director of the McGraw Hill Financial Board, said: “Doug is a true leader with a strong reputation for building, leading and managing high-performing teams. He understands the needs of clients in these challenging and changing times and has broad experience constructively engaging with governments and regulators around the world. Speaking on behalf of the Board of Directors, we look forward to working closely with Doug in his role as President and CEO.”

” Mr. Peterson said: “I feel honored and proud to be asked to lead this great Company. Terry’s passion, optimism and exceptional management of the Company have positioned us to succeed going forward. Terry and the Board had the vision to create McGraw Hill Financial and now I look forward to leading this new, fast-growing financial intelligence company. McGraw Hill Financial, with its iconic brands, promotes sustainable and orderly growth in the capital and commodity markets as the foremost provider of ratings, benchmarks and analytics to financial professionals and investors worldwide. I look forward to meeting with investors, clients, public officials and employees in the coming months to discuss how McGraw Hill Financial can even better serve the financial markets.”

Mr. Peterson earned an MBA from the Wharton School of the University of Pennsylvania in 1985 and a degree in History and Mathematics with Honors from Claremont McKenna College in 1980.  He currently serves on the Federal Deposit Insurance Corporation’s Systemic Resolution Advisory Committee, the Institute of International Finance’s Market Monitoring Group, the Board of Advisors of Wharton Financial Institutions Center, the Kravis Leadership Institute, and the Board of Trustees of Claremont McKenna College.

Mr. Rust said: “We are pleased, that as Chairman of the Board of McGraw Hill Financial, Terry will continue to help open global markets and to enhance the Company’s image as a leader in major international organizations, including as Chairman of the International Chamber of Commerce, the United States Council for International Business, Advisory Committee on Trade Policy Negotiations, the U.S.-India Business Council and the Emergency Committee on American Trade. He also serves on the Boards of the US-China Business Council and the U.S.-India Business Council. Terry has been an inspirational leader of McGraw-Hill since he became President and Chief Operating Officer 20 years ago and we are grateful to him for his dedication and commitment to the highest values of ethics and fairness during his remarkable tenure.

“Most recently, under Terry’s leadership of the Growth and Value Plan, we have created two powerful new Companies, McGraw Hill Financial and McGraw-Hill Education, which will serve their customers with greater focus and innovation. In addition, to Terry’s credit, the capstone for any CEO is to build a world-class leadership team where an internal candidate emerges as the clear choice to be the new leader.”

Mr. McGraw was elected Chairman of McGraw-Hill in 1999; Chief Executive Officer in 1998; and President and Chief Operating Officer in 1993. He has been a member of the Company’s Board of Directors since 1987. Mr. McGraw received a BA degree from Tufts University in 1972 and his MBA from the Wharton School of the University of Pennsylvania in 1976. He worked at the GTE Corporation as an investment manager in the Corporate Treasury and Pension Group until he joined McGraw-Hill in 1980. At McGraw-Hill, he held a number of management positions including Vice President, Corporate Planning, Publisher of Aviation Week, President of the McGraw-Hill Publications Company, President of McGraw-Hill Financial Services Company and Executive Vice President, Operations until he became President and Chief Operating Officer in 1993.

Mr. McGraw serves on the Board of Directors of United Technologies Corporation and Philips 66, as well as on the Boards of   philanthropic organizations, including the Committee Encouraging Corporate Philanthropy, The New York Public Library, Hartley House, and Asia Society. He is past Chairman of the Business Roundtable.

Since Mr. McGraw became CEO in 1998, the Company’s total return to shareholders has outperformed the S&P 500 over the past 10, 5, 3 and 1 year periods, as of June 30, 2013.  The Company has delivered a total return of approximately 300 percent versus 97 percent for the S&P 500. Under Mr. McGraw’s leadership as CEO, the Company has also returned more than $13 billion to shareholders through dividends and share repurchases. The Company has paid a dividend every year since 1937, and increased it every year since 1973. Fewer than 25 companies in the S&P 500 can claim this record.

A search for Mr. Peterson’s successor as President of Standard & Poor’s Ratings Services is underway.

As a Trustee and current parent, Peterson is a familiar face on Claremont McKenna College’s campus, and has graciously shared his business successes and lessons in numerous interactive discussions with students. Last August, he shared his story of leadership in the financial sector, through a global lens, with an audience of Kravis Leadership Institute and Robert Day School students, focusing on “purpose, passion, and principles.” Something he has always done as a new leader, he says, is carve out time with each of the individuals on his team, “getting in the trenches with them, and learning about the business, to better understand and explain the guts of what they do.”

In 2010, as a guest of the President’s Leaders Forum, he talked about his memorable experiences as a CMC student, and the road that led to his role as Chief Operating Officer of Citibank.

The forward-looking statements in this news release involve risks and uncertainties and are subject to change based on various important factors, including worldwide economic, financial, liquidity, political and regulatory conditions; the health of debt (including U.S. residential mortgage-backed securities and collateralized debt obligations) and equity markets, including possible future interest rate changes; the health of the economy; the successful marketing of competitive products; and the effect of competitive products and pricing.