Crisis and identity in the European Union

Is Europe facing an economic crisis? For economist and author Guy Sorman, this is a familiar question.

“Europe has always been in crisis,” Sorman told a lunchtime audience at the Athenaeum earlier this week. “In fact, I cannot remember when there hasn’t been a crisis.”

A noted French public intellectual and founder of the NGO Action Against Hunger, Sorman balanced his sober observations about the European economic landscape with a measure of soft-spoken humor as he discussed the struggling Euro and the sovereign debt crisis in Europe. 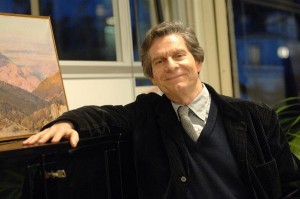 The problems in Cypress and Greece or the fate of the Euro certainly deserve attention, said Sorman, a guest of the President’s Leaders Forum, but you have to look further back, to the very beginning, to truly understand the deeper challenges facing the European Union.

“The very beginning,” in Sorman’s case, refers to the years immediately following World War II, and the work of economist and diplomat Jean Monnet and others to replace centuries-old animosity among nations with new economic ties.

“Europe had been a killing field for centuries, but this stopped in 1945,” he said, “and it was nothing short of a miracle.”

With a smile and a good-natured air, Sorman described this miracle—the forging of business relationships in Europe in the postwar years—and how transportation, technology, and trade dependence all have produced new identities in place of old ones.

France and Germany, for example, have a long history of opposition and enmity to each other, and yet today 50% of each countries’ imports/exports are with each other, Sorman said.

“Germany and France,” he said, “are today economically one.”

In the political sphere, however, the same kind of interdependence doesn’t exist. Sorman devoted much of his address to identifying the challenges to a unified European identity posed by the absence of a European constitution and a democratic process, and by the agendas of politicians, who think in terms of their local constituents rather than about what’s best for Europe as a whole.

“This is the more serious problem facing Europe,” he said. “A gap exists today between our real achievements as trading partners and our democratic aspirations for Europe.”

Sorman also described the imbalance between Europe’s welfare state and financial resources, and a lack of entrepreneurial competition and lower productivity as many of the region’s brightest young minds are leaving home to pursue better business opportunities in the United States.

Sorman also praised the U.S. culture and climate of philanthropy—something he says must be better developed in Europe.

“Our own traditions of giving have largely gone away because of socialist ideas,” he explained.

Which is why Sorman has devoted his efforts to his NGO Action Against Hunger and to advocating growth of a European social sector that imitates the American model. In the U.S., Sorman said, experimentation and innovation are encouraged—and people’s talents are tapped and utilized long after they’ve officially retired from the work force.

“When you retire in Europe, your life is over. You disappear,” Sorman said. “But in the United States, it is very different. Your social sector provides benefits not only to those who receive them, but to the givers as well. That is the sign of a successful civil society, and that is what Europe needs the most.”