Getting practical with past Kravis Prize recipients

"Don't let 'the best' be the enemy of 'the good' " -- that was Roy Prosterman's advice to students, faculty, and entrepreneurs during yesterday's gathering of past recipients of the Henry R. Kravis Prize in Leadership to discuss obstacles and lessons learned in their work.

The event, a "Global Leaders Forum" sponsored by the Kravis Leadership Institute, followed a luncheon address at the Marian Miner Cook Athenaeum by Johann Olav Koss, this year's recipient of the Kravis Prize for his work with his non-profit organization Right To Play. 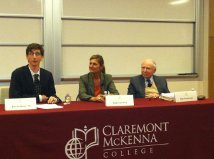 Held in Freeberg Forum, the event featured two groups of panelists -- led by moderators Zephanii Smith '13 and Ben Feldman '14, under the direction of KLI Director of Entrepreneurial Initiatives Neela Rajendra -- in an hour-long exploration of the theme of  "high impact" leadership.

The event also demonstrated another beneficial aspect of the prize: an opportunity for the recipients to exchange ideas and build relationships among their organizations. This vision of a "Kravis Prize community" has grown since the prize's founding in 2006 by Marie-Josée Kravis, chair of the selection committee, and Henry R. Kravis '67.

For Prosterman, who received the first Kravis Prize in 2006 in honor of his organization Landesa, "high impact" leadership is best achieved by avoiding absolutes. You must acknowledge practical realities, he said. "The best" isn't always achievable but "the good" certainly is. That's how Landesa has succeeded in securing land and farming rights for millions of landless people around the world.

"When you move into a community and start insisting on 'full, private ownership' of land for poor people, it's an anathema to the people in control," he told the audience. "But when you ask them instead to grant people '30-year rights,' then they're more willing to listen."

Such a pragmatic approach, in fact, underscored the comments of the other panelists as well.

"Women and young girls are 50% of the global population, and they give birth to the other 50%," said Oley Dibba-Wadda,  executive director of the Forum for African Women Educationalists (FAWE), "and that is why, in all we do, we try to make sure that they are being included, and engaged, as players and actors in every decision in their communities."

Madhav Chavan, co-founder of Pratham, which is improving educational opportunities in India, described his own experiences with public schools in his country.

"We all admire the expression 'it takes a village,' and then we leave our children's education in the hands of our schools," he said. "Do you know what these schools are? They're daycares. We must get our parents and community members more engaged in the learning process and not leave this task to specialized figures."

Vicky Colbert, the founder of Colombia-based Escuela Nueva, was similarly outspoken on education and how a good practical vision is crucial to having -- and sustaining -- real gains in improving educational systems.

" You don't spend more resources on an approach if it isn't working. I've realized over the years that More of the same is just not enough," she said. "The same is true for technology. Technology is important and helpful, but only if it's used in a mindful way. You have to change the pedagogic approach to produce a better result. You have to challenge the conventional ways of doing things."

For mothers2mothers, which addresses pediatric HIV transmission in Africa, co-founder Robin Smalley said that her organization found its first success by starting with more manageable goals.

"We didn't set out to cure AIDS in sub-Saharan Africa, we started with smaller objectives," she explained. "We knew that we needed to educate and empower women there, and to employ and professionalize them in addressing this crisis [of mother-to-child transmission of HIV]."

The result? Women are being trained in these communities as "mentor mothers," Smalley said. "The hospital is normally a frightening place for pregnant women. These mentor mothers are friends from the community. When they go to the hospital, they know now that they'll see someone they can trust."