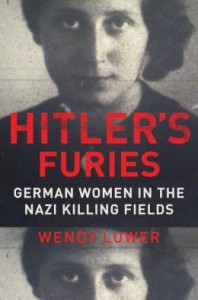 Wendy Lower's new book is a finalist for the National Book Award. The book draws on her archival research and fieldwork on the Holocaust, access to post-Soviet documents, and interviews with German witnesses.

The following press release was issued today by the National Book Foundation, noting that CMC's Wendy Lower, the John K. Roth Professor of History and a George R. Roberts Fellow, has been named a finalist for a 2013 National Book Award for her just-released "Hitler's Furies: German Women in the Nazi Killing Field." (The book was released in the United States on Oct. 8, and is being translated into 12 languages.)

For more on Lower's book, we also offer the following links: • Her interview with CBS Sunday for an Oct 6 segment “The vast reach of the Nazi Holocaust”

The selection of Finalists follows last month’s announcement of the first National Book Award Longlists of ten books in each of the Awards’ four categories: Fiction, Nonfiction, Poetry, and Young People’s Literature, the first year the Awards program featured both a Longlist and Finalists in each category. The Longlist selections and Finalists were chosen by a panel of five literary professionals, the first year in decades that judging panels included literary experts who are not writers in that genre. These changes were made to add new and diverse voices to the Awards program and expand its reach.

Four of this year’s Poetry Finalists are on the list for the first time, the exception being Frank Bidart, who is a three-time National Book Award Finalist (1997, 2005, and 2008) and a three-time finalist for the Pulitzer Prize. Among the first-time Finalists, Lucie Brock-Broido has published three collections of poetry and is the director of poetry at the School of the Arts at Columbia University; Adrian Matejka has published two collections of poetry and received a Cave Canem fellowship; Matt Rasmussen’s Black Aperture is his first collection of poetry, and Mary Szybist’s first collection, Granted, was a finalist for the 2003 National Book Critics Circle Award.

The Young People's Literature list includes two prior Finalists for the National Book Award:  Kathi Appelt in 2008 and Gene Luen Yang in 2006, when Yang was the first graphic novelist to be selected as a National Book Award Finalist. Among this year’s first-time Finalists, Cynthia Kadohata won a Newbery Award from the American Library Association in 2005. Tom McNeal is the author of both children’s books and novels for adults. Meg Rosoff won the 2005 Michael L. Printz Award.

Publishers submitted a total of 1,432 books for this year’s National Book Awards: 408 in Fiction, 517 in Nonfiction, 209 in Poetry, and 298 in Young People’s Literature. Judges’ decisions are made independent of the National Book Foundation staff and Board of Directors; deliberations are strictly confidential. To be eligible for a 2013 National Book Award, a book must have been published in the United States between December 1, 2012 and November 30, 2013, and must have been written by a United States citizen.

The Finalists Reading is open to the public; tickets are $10 and are available through The New School box office by calling 212-229-5488 or by emailing boxoffice@newschool.edu.

Following is the list of the 2013 National Book Award Finalists in Fiction, Nonfiction, Poetry, and Young People’s Literature.

Jill Lepore, Book of Ages: The Life and Opinions of Jane Franklin;  Alfred A. Knopf/Random House

George Packer, The Unwinding: An Inner History of the New America;  Farrar, Straus and Giroux