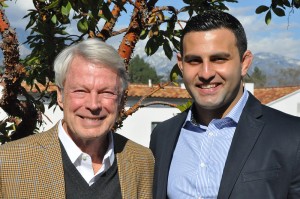 During a lunch discussion on Feb. 20, athlete Tareq Azim spoke passionately about how boxing is empowering women in Afghanistan. In 2007, after a shoulder injury sidelined his own professional boxing career, he started the Afghani Women's Boxing Federation because he wants his beloved country to stand on its own two feet. "Well, how do you expect it to stand on its own two feet," he asks, "if it is a male dominated society and women have nothing to say?" Women, he says, have to be the second foot that strengthens and balances Afghanistan's national posture.

There are the benefits to a country, and then there are the benefits to the young women who are becoming confident athletes in the process. They are physically stronger, mentally tougher, and, as Azim notes, the boxing––as has been noted in numerous other athlete success stories––serves as a metaphor for conquering self-doubt and societal challenges. He believes that involving women in such a male dominated sport–– in a male dominated society–– gives his trainees confidence in other areas of their lives. And he believes that boxing in Afghanistan, in particular, does a lot more for the women than it would anywhere else, given the depth of the sportsmanship and the distance the sport can take you. His hope is that lessons learned in boxing are far greater than just physically fighting––that it's teaching girls to “fight for what they believe in; fight for a goal or vision, and have an unstoppable, relentless drive for success.”

Azim's visit to the Athenaeum, as well as an afternoon discussion with students in professor P. Edward Haley's class, were coordinated by friend Mark Palmer '88, and sponsored by the Center for Human Rights Leadership.

The athlete was born in Germany and his family immigrated to San Francisco shortly after his birth. In 2004, he graduated from Fresno State University and shortly thereafter co-founded the non-profit organization, Hope of Mother, with his mother, Mina Wali. Azim credits his mother for all of his current projects in Afghanistan. He recalls her saying, “As soon as you accomplish something here [in the U.S.], we are taking it back to Afghanistan to service the orphans and the widowed women.” Hope of Mother has opened the first co-educational school in the Nengrahar region. Additionally, the organization has worked to open a recreation center for orphans that offers tutoring, mentoring, and other activities to prevent recruitment into terrorist organizations. Hope of Mother has also opened Lily’s Medical Clinic in the Surchroad Village.

Azim, who lives in San Francisco (he graduated from Fresno State with bachelor's degrees in environmental science and agribusiness), spends about one of every six months in Afghanistan in order to maintain his connections and help people understand why boxing is more effective for women between the ages of 12-18 than a traditional after-school program. The hope, he says, is that the program's success will prompt governments in other countries, such as Uganda, to use the model to develop connections with local communities.

In preparing his remarks to CMC students, the most important message he wanted to leave them with was this: “That they control their destinies, recognize their abilities, and have confidence and conviction to carry out their visions.”

When asked who personally inspires him, Azim replies: "Leaders who have inspired people to achieve their goals and vision––from coaches and mentors in my young ages, to coaches and mentors in my professional career––were the inspiration behind my mission to tackle my vision. I hope to become that person, someone who one day inspires someone to do and implement their vision.”

Read more about Azim and his efforts in Afghanistan.