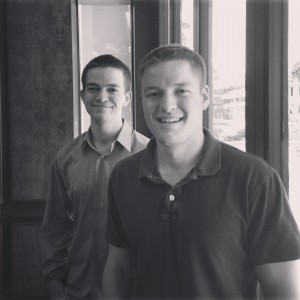 Andrew (left) and Ben. Yep. Their jobs as Ath Fellows are pretty sweet.

Benjamin Tillotson ’15 and Andrew Willis ’14, new Ath Fellows for the Marian Miner Cook Athenaeum, hope to book a diverse and interesting group of speakers when they begin their stint for 2013-2014.

“We hope to stay true to spirit of Athenaeum by seeking and promoting unique and engaging events for the student body,” says Willis.

Sophomore Tillotson is a Boston native and majoring in philosophy and public affairs. He spent the previous semester working on the Massachusetts senate race, is actively involved in ASCMC on campus, and looks forward to the rest of his term as Dorm Affairs Chair.

“I love spending time on campus, but also like to get out and explore California,” Tillotson says. “As an Ath Fellow I’d like to engage speakers with an emphasis on topics relevant to the CMC community. We are so fortunate to have this extraordinary venue for intellectual discourse on campus, and I'm excited to be there every night of the upcoming academic year.”

Willis is a religious studies and government major with general interests in philosophy, literature, technology, and George RR Martin. He grew up as an American expatriate living in Saudi Arabia and Abu Dhabi in the United Arab Emirates. As a result, he is an avid fan of both the Kolkata Knight Riders and the Boston Red Sox.

“I’d like to bring in speakers to Athenaeum who will complicate simple narratives, he says. “Speakers like Nate Silver who challenge the orthodoxy of pundit predictions with statistical analysis, or Susan Cain, who argues against the extrovert ideal.”

We caught up with Tillotson and Willis recently and asked them a few Ath-centric questions.

CMC: Who would you like to book as your dream guest speaker at the Ath?

Andrew: My dream guest speaker would be Gregory David Roberts, the author of Shantaram, which follows the semi-autobiographical story of an escaped Australian convict in India who starts a clinic in the slums, joins the mafia, establishes a Bollywood casting agency, and fights with the Mujihadeen in Afghanistan. He is also a noted poet, philosopher, and activist. Hopefully, he may be touring with his new book, Mountain Shadow, in the spring of next year so I am cautiously optimistic about bringing him to the Athenaeum.

CMC: Realistically speaking, who do you think you can get?

Andrew: I would love to bring Chris Abani, a professor of literature at the University of California, Riverside. Chris Abani was first arrested at the age of 18 when he published his first book Masters of the Board. This book, depicting a coup in Nigeria, not only attracted the attention of the authoritarian regime but also the praise of the international community. As a result of these experiences, Abani could offer a unique and engaging perspective to the Claremont community. Other speakers I am aiming for include, Guy Kawasaki, a Silicon Valley venture capitalist and co-founder of Alltop.com, an aggregate website of popular topics on the web; Salman Khan, founder of the Khan Academy; and Susan Cain, the author of Quiet: The Power of Introverts In a World That Can’t Stop Talking.

CMC: What does the Ath mean to you, personally?

Ben: The Ath is like a fifth class to me. It's an incredible resource to have on campus and it's one of the things I love most about CMC.

Andrew: The Athenaeum is my favorite part of CMC. In its bottomless list of speakers, I found a home for my curiosity and desire to learn outside of the classroom. The Athenaeum not only contributes to the cultural and intellectual conversation on campus but also provides a comfortable community space. As I said in my application, I get this “warm and fuzzy” sense now whenever I walk into the Athenaeum to see my classmates and professors gathered there joined by common interest. At its best, the Athenaeum also fortifies my liberal arts education by challenging my core principles and emphasizing critical thinking.

CMC: What led you to enroll at CMC?

Ben: I thought I wanted to apply early to Pomona, so I came out to Claremont for an overnight. I spent two nights at Pomona, and two hours at CMC. I was hooked, and applied early to CMC instead.

Andrew: After an impressive whiteboard of pros and cons, I decided to enroll at CMC because of its inclusive social scene and focus on a pragmatic liberal arts education.

CMC: What was the process like in applying to be an Ath Fellow?

Ben: There was a lengthy written application and then an interview where you had to do a mock introduction.

Andrew: The call goes out for applications in early May and the applications were due on April 1. The applications consist of a personal statement and sample Fortnightly, featuring your dream list of speakers. After an initial selection, the final four applicants are invited to an interview with members of the Athenaeum Advisory Council. From there, the Advisory Council selects the two fellows. The other thing worth mentioning is that it’s competitive process. There were many excellent candidates for the Ath Fellow position this year.

CMC: What is your favorite piece of technology?

Ben: Harry Potter, Kill Bill, and for now “Get Lucky” by Daft Punk.

Andrew: The Princess Bride is the greatest movie ever made. Any other choice is simply inconceivable. There are plenty of reasons to love this movie: R.O.U.S., battles of wit, mock left-handedness, Inigo Montoya, Miracle Max, and Mawage. But at the end of the day, the reason I love this movie is the simplicity of the story’s message. Stripped of the fantasy, the movie is about a sick young boy who is visited by his grandfather, who reads him a story that says the most important thing in life is true love.

CMC: What is your favorite catchphrase and why?

Andrew: From Buckaroo Banzai, “Wherever you go, there you are.” It is a perfect traveler’s mantra.

CMC: Do you have a personal hero? If so, who and why?

Ben: There are plenty of people I admire and look up to, but no one person in particular stands out.

Andrew: I do not have any one personal hero. Instead, I am a fan of several heroes for their unique characteristics. I admire the humor of my father, the wit of my sister, and my mother’s perseverance. In history, I admire the creative and political achievements of Pierre Beaumarchais.