Photojournalist and Alumna Allison Davis O’Keefe ’00 Captures Ecstasy and Agony in Hockey Team’s Drive to “Win It All!” 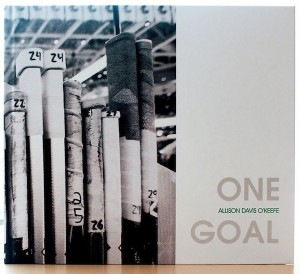 One Goal was published in November 2012 by Burn Magazine. Its 71 stunning black-and-white photos look into the locker room, the offices, and the arenas where the team's mission and accomplishments unfolded.

In her first book, One Goal, award-winning photojournalist Allison Davis O’Keefe chronicles the  final season in which the University of North Dakota hockey team competed under their moniker of the “Fighting Sioux.”

The hardcover book of 71 black and white images, published by Burn Magazine and printed in Italy, presents a fascinating look on the ice and behind the scenes of the team’s steadfast march to what they hoped would be a national championship.

Along the way, O’Keefe, through her lens, paints a vivid picture of what a hockey team can mean to a college, a town, players, and fans.

A Class of 2000 graduate of CMC as well as the International Center of Photography, O’Keefe spent nine years working for CBS News covering the terrorist attacks of September 11, 2001 (for which she shared an Emmy Award), the presidential campaigns of 2004 and 2008, and the U.S. Congress.

O'Keefe will visit the Athenaeum on Thursday, March 28, as a guest of the Gould Center for Humanistic Studies. (Read more about O'Keefe and other Gould guests visiting this spring.)

CMC: What attracted you to the idea of doing a photo-essay book about a North Dakota hockey team engaged in their final season as the “Fighting Sioux”?

Allison: I wanted to follow a sports team behind the scenes, and all-access. I didn’t specifically desire to delve into the controversy. Coach Dave Hakstol allowed me to follow the team during 2010-2011 because it was to be the last season as the “Fighting Sioux.” While that transition is the backdrop, my book is about the team, the town, and the sport itself.

CMC: The controversy was about the nickname?

Allison: In 2005, the NCAA issued a list of 18 colleges and universities with “hostile and abusive” Native American nicknames, included among them the Florida Seminoles, Illinois Fighting Illini and the University of North Dakota Fighting Sioux. Some of those institutions–– such as Florida––were able to come to agreement with their local tribes, which enabled them to continue to use the nickname. Others, such as UND, were not, for a myriad of reasons. The fan base of this team is deeply passionate about the nickname, so it was a tough transition and became a hotly contested political issue within the community.

To many people, they will always be the “Fighting Sioux.” And that passion will continue through the high level of play, the devoted fan base, and history of the program.

CMC: Why did you choose to take black and white pictures as opposed to color?

Allison: I shot the project in color. It was a postproduction editorial decision to then develop the digital images in black and white. The team color is green and I felt that the green would take over the image. When removed, the emotion of the moment emerged in a more profound way, and I found the pictures to be timeless. For me, this book and project is about the emotions driving ‘sport’–– the passion of fans, the devastation of loss, escalation of joy, and the quietness of a player when he finds himself alone before a big event.

CMC: What did you learn along the way about a team so singularly focused on one goal–– winning it all at the end of the season?

Allison: From Coach Hakstol I learned the importance of recognizing your accomplishments along the way. More than a year after this season, Hakstol told me he wished that the guys knew how proud he was of all that they had accomplished (winning the Broadmore Trophy, McNaughton Cup) despite the ultimate loss, and that there is a way to look toward the final prize while still appreciating the wins along the way. The larger lessons of sports are what I find so valuable to all of us.

CMC: What does the title of your book––One Goal––mean, exactly?

Allison: It has many layers of meaning. It takes only one goal to win or lose a hockey game. But this team especially had just ONE goal in mind during the season, and that was to win a national championship. They did not achieve that goal. But, sometimes in losing, there are just as many important lessons about life.

CMC: What were you looking to achieve from a purely artistic sense with your photographs in the book?

Allison: I was always looking at details, sometimes odd details. I focused on things like ice sharpening equipment, skates, sticks lined up, and found some of my favorite images are the ones of the players alone. One of my favorite photographs is of Derek Forbort laying on the couch in the lobby of the hotel in Mankato, Minnesota. There was a classic Midwestern snowstorm that roared into town that weekend, and the game was postponed from Saturday night until Sunday afternoon because it was too dangerous for people to travel to the game. I find the solitude interesting.

CMC: What was the most challenging shot?

Allison: The most challenging moment was in the locker room after they had lost their final game. It was such a devastating loss for these young men, and for the coaches who invested so much into that season. I needed to be there, but it was extremely difficult.

CMC: Who wrote the text in the book?

Allison: Matt Greene, who is a Stanley Cup-winning assistant captain for the Los Angeles Kings, wrote the forward. He played for the University of North Dakota. His words truly capture the passion and devotion that those who play for UND feel about the community and the experience. But I think his sentiment goes well beyond the sport. In the forward, he writes that before taking the ice with his team, instead of feeling pressure, he felt gratitude. I believe there is a lesson for all of us in that sentiment. I wrote an afterward about the experience, and, throughout the book, there are a few quotations from my interviews with Coach Dave Hakstol and Chay Gennoway, the captain that season. I interviewed a number of players and Hakstol during the season but much of that has yet to be published.