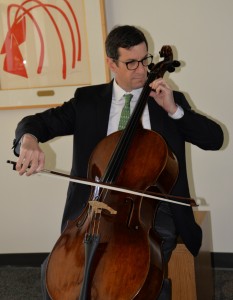 Joshua Rosett, Curb Family Associate Professor of Business and Law and George R. Roberts Fellow, is the new director of Claremont McKenna's Financial Economics Institute. He also happens to be a trained cellist.

[Note: An interview with Rosett about his musicianship, and how music has connected him to students, is coming soon! Meanwhile, below is the announcement about his new role at FEI.]

Joshua G. Rosett, the Curb Family Associate Professor of Business and Law and George R. Roberts Fellow, has been appointed as the new director of the Financial Economics Institute. In this role, Professor Rosett, who is on the faculty of the Robert Day School of Economics and Finance, leads the Institute’s support for student and faculty research, including student access to powerful, financial databases such as the Bloomberg Terminal and the Wharton Research Data System.

Rosett follows in the footsteps of former FEI leaders Lisa Meulbroek, the Fritz B. Burns Professor of Financial Economics; Eric Hughson, the Don and Lorraine Freeberg Professor of Economics; and Janet Kiholm Smith, the Von Tobel Professor of Economics. As director, he continues the Institute’s close work with the Robert Day School Board of Advisors, led by co-chairs Peter Barker ’70 P’01 and James McElwee ’74 P’12.

Professor Rosett’s research combines aspects of economics and finance and accounting, and has been published in top journals in all three fields. His primary focus is on valuation of human capital from the corporate perspective.

Professor Rosett teaches courses in financial accounting and financial statement analysis, and is currently an editor of the Journal of Applied Finance, a publication of the Financial Management Association. He holds a B.A. from the University of Chicago, and an M. A. and Ph.D. from Princeton University.

Perhaps lesser known is that prior to becoming an economist, he planned to pursue a professional career as a cellist, and trained under Dudley Powers, principal cellist of the Chicago Symphony, who would later lead the strings department at Northwestern University for more than three decades. At CMC, Professor Rosett joined the Claremont Concert Orchestra and has accompanied conductor Dean Michael Lamkin to Austria to play in the Haydn Festival. He has also performed at CMC’s Convocation, at the Athenaeum, and two noon-concert programs at Scripps College’s Balch Auditorium.