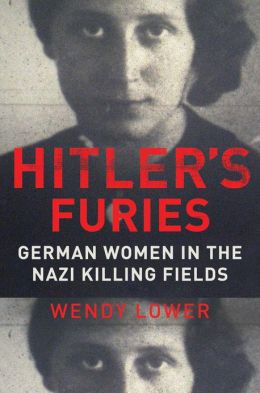 Wendy Lower's forthcoming book has been longlisted for a National Book Award. The book draws on her archival research and fieldwork on the Holocaust, access to post-Soviet documents, and interviews with German witnesses.

September 18 started out as any other morning, and then the phone rang. On the other end was Wendy Lower’s editor at Houghton Mifflin Harcourt, telling her that her book, Hitler's Furies: German Women in the Nazi Killing Fields, had been long-listed list for a 2013 National Book Award, in the category of nonfiction. “It was such an unexpected honor,” says Lower, the John K. Roth Professor of History and George R. Roberts Fellow. “As you can imagine, I am very pleased.”

The National Book Awards recognize and celebrate the best of American literature and raise the cultural appreciation of great writing in the country, while advancing the careers of both established and emerging writers. Finalists will be announced on Oct. 16, and winners will be named at a gala dinner and ceremony in New York on Nov. 20.

Congratulatory Tweets to Lower have surfaced on Twitter, weeks ahead of her book’s anticipated Oct. 8 U.S. arrival. The book is currently being translated into 12 languages, with wider publication outside the United States expected in November. Earlier this week, the entire longlist of 40 books in the National Book Award’s four categories were announced exclusively in the Daily Beast.

Lower’s research and resulting book disturbs the long-held picture of German women holding down the home front during the war, as loyal wives and cheerleaders for the Führer. Lower instead makes the incisive case for the massive complicity, and worse, of the 500,000 young German women she places, for the first time, directly in the killing fields of the expanding Reich.

The CMC scholar was interviewed about her findings by C-SPAN2’s BookTV in June, and will embark on a book tour this fall. Her 17-minute segment with BookTV focuses on the role of German women on the Nazi eastern front—not only as plunderers and direct witnesses, but as actual killers.

The book is described as a fascinating and convincing picture of a morally “lost generation” of young women, born into a defeated, tumultuous post–World War I Germany, and then swept up in the nationalistic fervor of the Nazi movement—a twisted political awakening that turned to genocide. These young women—nurses, teachers, secretaries, wives, and mistresses—saw the emerging Nazi empire as a kind of “wild east” of career and matrimonial opportunity, and yet could not have imagined what they would witness and do there.

Drawing on 20 years of archival and field work on the Holocaust, access to post-Soviet documents, and interviews with German witnesses, Lower presents overwhelming evidence that these women were more than “desk murderers” or comforters of murderous German men: that they went on “shopping sprees” for Jewish-owned goods and also brutalized Jews in the ghettos of Poland, Ukraine, and Belarus; that they were present at killing-field picnics, not only providing refreshment but also taking their turn at the mass shooting. And Lower uncovers the stories, perhaps most horrific, of SS wives with children of their own, whose female brutality is as chilling as any in history.

With her book, “ I put them on the map of the killing fields, which has not been done before,” Lower says.

In the category of nonfiction, here is the complete list of authors/books nominated for a 2013 National Book Award:

Where to buy/pre-order Hitler's Furies: