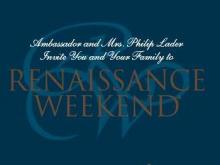 “What did you do—I mean, you must’ve done something to get invited to this thing?” asked the airport shuttle driver transporting me to the 2000 New Year’s Renaissance Weekend policy wonk retreat at Hilton Head. I suspect my politically incorrect research on affirmative action and workforce diversity drew the attention of one of the 1,200 RW participants, but I never found out who sponsored my invitation to the wildly eclectic mix of politicians, reporters, lobbyists, lawyers, entertainers, corporate CEOs, medical researchers, authors, foundation directors, and other “accomplished” folk.
RW had its origins in a 1981 New Year’s “intellectual house party” hosted by Phil and Linda Lader, who became “Friends of Bill” (Clinton): Phil was White House chief of staff, and later appointed ambassador to the Court of Saint James. Linda, who holds a divinity degree from Yale, is now in charge of RW.
The prestige of Renaissance Weekends probably crested during the Clinton presidencies when a New York Times reporter archly observed in 1993 that, “beneath the self-conscious egalitarianism of the weekends, where participants go by their first names and gather to share personal revelations and ideas about public policy, there has always been more than a hint of exclusiveness.” A Wall Street Journal reporter informed me that, “If you’re invited, you have to go.” Glad I did. These and the additional four gatherings I attended were stimulating but exhausting—a 72-hour marathon of panels, meals, drinks, more panels and, of course, “networking.”
The aim is to mix a range of occupational and personal perspectives in a somewhat informal, festive setting. My favorite RW memory is singing “California Here I Come” with a Supreme Court justice, a nationally known sex-therapist, and a major conservative movement leader at 2 a.m. on New Year’s Eve/Day 2004—my last RW until this year.  (I write this trying to observe Renaissance rules of confidentiality and “off the record” guarantees.)
The 2013 guest roster reflected major occupational and sociological shifts that we’d studied in my Government 113 class on inequality and public policy. There were fewer luminaries from the realms of print and mainstream journalism and a diminished presence of government officials, but there were more medical and health care professionals and researchers, and more young, entrepreneurial pioneers, especially those in “new media” tech and web-world ventures.
There was the usual mix of serious, earnest and light topics: “The Next BIG Idea,” “Renewing America,” “Working for a Better World, “Faith in Turbulent Times,” and a broad range of panels on health, spiritual/personal growth and financial markets. I was assigned to lead a “free for all” discussion on the topic of “Retiring Retirement.” I was also assigned to two panels on the Supreme Court, and a symposium on what generations can learn from each other.
CMC’s presence at RW events has increased. Pam Gann has attended RW. CMC/Keck Science professor emeritus and cancer researcher David Sadava is a “regular.” And there were three CMC alums: U.S. House of Representatives Chaplain Pat Conroy (’72); Citigroup Board of Directors Vice Chairman Michael Helfer (’67); and Chicago civic activist Jay Tremblay (’80).

RW organizers may have some generational challenges to surmount. The event still seems largely peopled by and geared to talkative baby boomers who favor sustained face-to-face conversations and panel discussions over several days. Whether that format will flourish with younger generations more “wired” into social media and who favor shorter, more rapid exchanges through texting and Twitter remains to be seen. But, so far, so good.
––––Professor Frederick Lynch is the author of One Nation Under AARP: The Fight Over Medicare, Social Security, and America's Future."