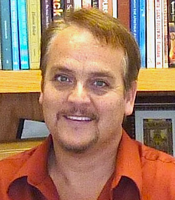 RLST 138: American Religious History starts  Wednesday, May 22 and will introduce students to key movements, debates, and controversies from the Founding Fathers to Barack Obama's use of religion in the 2008 Election. It will also bring in guest speakers and offer optional field trips to Christian, Muslim, and Buddhist houses of worship.

“It will be structured as a discussion-seminar based on a close reading of short primary source texts,” Professor Espinosa says. “We will also watch documentary film clips, bring in Catholic, Jewish, Pentecostal, and Hindu guest speakers, and offer optional field trips to museums and a Muslim Mosque, a Protestant Church, and Hsi Lai Buddhist Temple, one of the largest Buddhist Temples in the U.S. Our class will be very interactive, lively, and I hope a lot of fun!”

CMC: Your course covers so many different faiths; is there one unifying principle that is shared by all of them? And if so, what is it?

Espinosa: Because religious founders, ideas, and movements have brought about significant social change in religion, politics, gender, and race relations from the colonial era to the present. Religious arguments, for example, were not only used to justify slavery, but also to vigorously oppose it through the abolitionist movement. Religion was a key resource in Martin Luther King's struggle for Civil Rights and Social Justice and C?sar Ch?vez's United Farm Worker's struggle. President Obama recognized this when he wrote in The Audacity of Hope, "Frederick Douglass, Abraham, Lincoln, William Jennings Bryan, Dorothy Day, Martin Luther King, Jr. indeed, the majority of great reformers in American history not only were motivated by faith but repeatedly used religious language to argue their causes." This class will explore how they used their religious traditions, symbols, and rhetoric to argue for social change.

CMC: What aspect of your class do you like teaching the most and why? (e.g. Deism, Scopes Monkey Trial, founders, a particular idea, etc.)

Espinosa: I love it all. I especially enjoy analyzing the Founding Fathers, new religious movements, religion and politics, and the Abolitionist, Social Gospel, Civil Rights, and Liberation movements.

CMC: Organized religion is often demonized as the root historical cause of much misery and divisiveness in the world. Can you cite examples where adherence to religious practice has yielded beneficial results?

Espinosa: Religiously motivated people have caused violence. There's no denying this. We explore this full throttle in my seminar on Religion, Politics, and Global Violence. However, we've found that most religious extremists from Iain Paisley to Baruch Goldstein to Timothy McVeigh to Osama bin Laden represent what I call the 0.01 percent of people in their traditions and all have been roundly repudiated by virtually all of their major mainstream leaders. Ironically, the working presupposition that religion is the root cause of all or most of the world's violence is problematic because over 80 million people were killed in communist countries like the USSR and China where religion was either banned or strictly controlled by the state.

CMC: What then are the benefits of religion?

Espinosa: Gandhi, Dorothy Day, Martin Luther King, Cesar Chavez, Muhammad Yunus, the Dalai Lama and countless other progressive Catholic, Jewish, Protestant, Hindu, Muslim, and Buddhist reformers here in the U.S. and around the world have actively drawn on religion to bring about positive social change in their struggles against racism, colonialism, exploitation of labor, micro-financing, and peace initiatives.

For these reasons and many others, the vast majority of Americans are religious, spiritual, or believe in a universal spirit. A recent article on the economics of U.S. religion found that religious giving accounts for about 50% of all charitable giving in the U.S. ($68 billion). Religious volunteer work is more common than any other form of volunteer work in the U.S, and the majority of nonprofit institutions in the U.S., are or were, religiously based. Catholic Charities and Lutheran Social Services, for example, provide direct relief to millions of Americans every year suffering from poverty, homelessness, and social marginalization.

The Pew Forum on Religion & Public Life U.S. Religious Landscape Survey of 35,000 Americans found that 92 percent of Americans believe in God or a universal spirit. Another study found that 40 percent attend religious services like church, synagogue, temple, mosque, Hillel, youth groups, etc., on a weekly basis, and church membership has increased from 17 percent at the time of the American Revolution to nearly 60 percent today. For all of these reasons George W. Bush, Hillary Clinton, and Barack Obama have tried to harness the power of religion to help them win elections. For the Pew study, see: http://religions.pewforum.org/reports/#

CMC: You are an expert on the religious practices (or lack thereof) of American presidents like George Washington.  Can you tell us a little about the book you recently edited: Righteousness and Justice: Religion, Barack Obama, and the 2008 Election.

Espinosa: This is the third book in a series on religion and the American presidency. It analyzes how Barack Obama and John McCain drew on and crafted religious rhetoric and public policy positions to promote their domestic and foreign policies to the nation. The 17 authors draw on the latest national social science research to analyze ten key voting constituencies: African Americans, Latinos, Asian Americans, Jews, Muslims, Mainline Protestants, Evangelicals, Catholics, Seculars, and Women. This is consistent with my other work as co-editor of The Columbia University Press Series in Religion and Politics.

CMC: It was thought by many that with all the technological marvels and advancements of the modern age, religious practice would be supplanted by a stronger faith in science, but it seems that just the opposite is happening. Can you explain the reason for it?

Espinosa: In the 1960s a new Death of God theology emerged and predicted the end of religion. One of my own mentors at Harvard University, Harvey Cox, wrote a book called The Secular City, wherein he predicted the eclipse of traditional religiosity in the face of secular modernity. That prediction has not come to pass and after reading the headlines of our daily newspapers it seems inaccurate to argue that religion has nothing to say for better or worse in today's world.

The most interesting development taking place today is the decision by highly modern and educated people to affirm both belief in science and God. The best example of this is geneticist Francis Collins, the Director of the U.S. National Institute of Health (NIH) and leadership of the Human Genome Project (HGP). Rather than have to choose one, many Americans are choosing however paradoxically to embrace both to varying degrees.

CMC: Why is religious practice still strong in the U.S. despite its apparent decline in Europe?

Espinosa: In large part because the Founding Fathers promoted the principle of separation of church and state, which in effect created a religious marketplace that forced religions to adapt to the ordinary needs of people or die out. American religion is one of the most adaptive cultural institutions in the U.S. today.

Finally, it's hard to kill an idea so grand, terrifying, and comforting as "God." For this reason, religion will remain one of this nation's most profound influences on American society, and even more so with the growth of the nation's 30 million immigrants from Latin America, Africa, Asia, and the Middle East, who are almost all disproportionately religious. Like it or not, religion is here to stay. This course will try to make sense out the origins and bewildering variety of religions and how they have influenced American culture and society.

American religion has a disproportionate influence around the world because a number of religions that were born in the U.S. are now growing in Africa, Asia, Latin America, the Middle East, and Eastern Europe. Pentecostalism, Evangelicalism, Mormonism, Jehovah's Witnesses, Christian Science, and 7th-Day Adventism were all founded on American soil and are now growing around the world. The political implications of this development for American foreign policy is analyzed in a study by Princeton University sociologist Robert Wuthnow in Boundless Faith: The Global Outreach of American Churches (2009). Similarly, American-born or heavily influenced traditions like Reconstructionist Judaism, the Nation of Islam, Scientology, and the Hindu Vedanta Society of America have also influenced Diasporic Jews, Muslims, Scientologists, and Hindus around the world. Thus, in a small way, the study of American religion is the study of world religions.