Editor’s Note: This story was written before the final Moments in Minutes results were announced. The first place winner is Lindsey Mattila ’17, the second place winner is Emily Chambard ’16 and third place winner is Jenya Green ’16 . In the coming weeks, all the presentations will be posted on the Office of Off-Campus Study website.

The weather might have been wet in January during the Pacific Northwest Networking Trip to Portland, OR and Seattle, WA sponsored by the Robert Day School of Economics and Finance at CMC. Nonetheless, it was also “raining” connections for the group of students that participated in the event, which was inaugurated in 2013 with a networking trip to Seattle.

A big benefit of enrollment at CMC is the opportunity to hear the amazing array of speakers (and subjects) featured at the Marion Miner Cook Athenaeum almost every day of every week.

But for Shivani Pandya ‘18 and four of her sophomore friends (Lauren Giurata ’18, Nisha Behrman ’18, Janine Ivy ’18 and Melissa Muller ’18), that benefit also presented a challenge.

For many graduating high school seniors, there is nothing quite like the feeling of exhilaration (and relief!) on being accepted into a college or university of their choice. And for college-bound students who have staked their hopes on Early Decision acceptance from a particular place of higher learning, the experience can be even more exciting.

Early decision is a common policy used in college admissions in the U.S. for admitting students to undergraduate programs in which candidates consider a certain institution to be their top choice.

Yesterday, I spent the day and evening with about forty students in my office, actively listening to their personal and shared experiences, deep concerns, and imaginative, constructive suggestions. 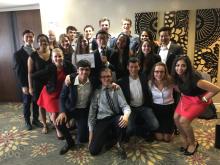 “We won Best Large Delegation, which is the highest delegation award that each conference gives out,” says CMC MUN team member, Naina Mullick ‘17  “Additionally, a number of delegates won individual awards for their performance in committee.”

Watch Tim's video interview to see some pictures, see a few clips of him racing and to hear Tim talk about out another one his favorite moments on the race track:

I hope you enjoyed a rejuvenating and productive summer.