Highlights from the CMS spring sports season (updated to include results from Nationals):

Erica Perkins Jasper, a leader in intercollegiate tennis, successful Division I head coach, and distinguished student-athlete, has been named Director of Claremont-Mudd-Scripps Athletics.

Tumey joined CMS in 2016. CMS finished this past year with three national championships and a No. 3 ranking in the Division III Learfield Directors’ Cup. 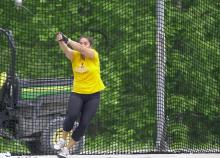 The final day of the 2017-18 athletic year came to a dramatic close on Saturday for Claremont-Mudd-Scripps. Three Athenas won individual national championships in track & field, and the team placed fourth at the NCAA Division III Championships for the highest finish in program history.

The Claremont-Mudd-Scripps women’s golf team defeated Williams College in a two-hole playoff to win the NCAA Division III national championship on Friday, May 11.

Margaret Loncki ’18 paced the Athenas and won the individual national championship with a four-round score of 11-over-par 303 on the El Campeon Golf Course in Howey-in-the-Hills, Fla.

The Athenas, who started the day with a four-stroke lead over Williams, prevailed on the second sudden-death playoff hole. It was the CMS athletic program's first NCAA title in women's golf and fifth NCAA team title overall.

Women's Update
The Foxes fell to Tulane University 31-14 in the championship match of the the USA Rugby Division II Spring College Championship final on May 5 at Cal State Fullerton.

Claremont defeated Salisbury University (Maryland) 44-27 in the semifinals on May 4.

Five Claremont-Mudd-Scripps teams are ranked in the top-10 nationally as they enter the final weeks of their spring seasons.

The Southern California Intercollegiate Athletic Conference (SCIAC) selected Mike Sutton '76 as its 2018 Distinguished Service Award recipient. Sutton has dedicated nearly 40 years of his career to intercollegiate athletics at Claremont McKenna College, Claremont-Mudd-Scripps, and within the SCIAC.

"It's an incredible affirmation to be considered worthy of the same recognition in the Distinguished Service Award that many of my mentors in the conference over the years have received," Sutton said.