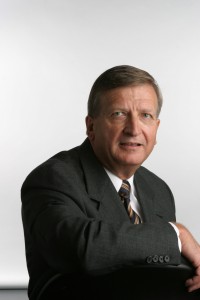 Ralph Rossum was recently on the radio to discuss Understanding Clarence Thomas: The Jurisprudence of Constitutional Restoration (University Press of Kansas, 2013). This newest book follows Rossum’s comprehensive examination of U.S. Supreme Court Justice Antonin Scalia’s legal opinions and writings: Antonin Scalia’s Jurisprudence: Text and Tradition, published in 2006, and adds yet another dimension of talking points to Rossum’s intellectual cache on the Constitution and constitutional law.

His detailed assessment of Thomas explores how the justice has pursued an original general meaning approach to constitutional interpretation, and his impact on the bench. Reviewer Gary McDowell at the University of Richmond says the book could “not be more timely” and not have had “a better expositor than Ralph Rossum.”

Rossum’s expertise on America’s founding and its legal backbone is diverse. Included in the 10 books now bearing his name as author or co-author is 2011’s The Supreme Court and Tribal Gaming: California v. Cabazon Band of Mission Indians, published between his two studies of conservative Supreme Court justices. The book tracked Indian rights and the meaning of tribal sovereignty through the Supreme Court’s 1987 decision in that case–– a decision that led to the boom of Indian casinos.

Now, from his expertise in Indian gaming issues, the Salvatori Professor of Political Philosophy & American Constitutionalism, again pivots to the conservative wing of the bench.

“I’m drawn to justices on the court that have taken an originalist approach to constitutional interpretation,” Rossum told Blog Talk Radio host Elizabeth Kelley last month. Turning from one “unabashed constitutional originalist” to another, he told her, was a natural progression in scholarship.

“I wanted to look at how these two justices are the same, and where they’re different,” Rossum told Kelley. “Thomas’ originalist focus is much wider. He’ll take in a number of things that Scalia will dismiss as mere legislative history. As a result, I think Thomas can give a more convincing argument on originalist grounds, on a number of occasions, than can Justice Scalia.”

His knowledge of the Supreme Court and American constitutionalism is an area of expertise that leads to numerous speaking invitations. During 2013-14, Rossum gave talks on Clarence Thomas at the law schools of Rutgers, Stanford, UCLA, Notre Dame, the University of Richmond, Louisiana State University, Chapman University, Northwestern, and the University of Idaho.

Rossum’s fascination with constitutional law can be traced in part, he explained, by tendencies nurtured by the late University of Chicago political science professor Herbert J. Storing. Rossum was in classes taught by the young, influential U of Chicago faculty member, who was already a respected essayist, author, and editor whose intellect feasted on the American constitutional system. Though Storing died unexpectedly at the age of 49, his seven-volume The Complete Anti-Federalist is regarded as an authority on the role and importance of Anti-Federalists’ writings in understanding the U.S. Constitution.

It was with another U of Chicago classmate and Storing alumnus, G. Alan Tarr–– a professor at Rutgers University–– that Rossum co-wrote American Constitutional Law, a two-volume casebook now in its ninth edition.

Rossum’s spot on Blog Talk Radio is one in a series of channels through which Rossum has been broadcast recently on topics under his purview–– the oft-controversial Clarence Thomas being at the forefont. In early spring, just a week after legal affairs writer Jeffrey’s Toobin’s article on Thomas ran in The New Yorker, in essence accusing Thomas of not paying attention during oral arguments, Rossum defended the Supreme Court Justice in a Feb. 28, 2014 piece for the Library of Law and Liberty’s Liberty Law Blog. Writes Rossum:

One suspects that Toobin attacked Thomas’s silence during oral arguments in an attempt, like a failed magician, to distract his readers with a clumsy sleight of hand. He wants to distract them from realizing how successful Thomas has been where it matters most – the decisions that follow from those oral arguments.

On May 1, the American Bar Association’s publication, the ABA Journal, published an article called “The Quiet Man,” referring to the Toobin piece, and also devoting half its space to referencing and quoting Rossum’s new book. Earlier this week, on June 9, Rossum posted yet another sizable piece for the Liberty Law Blog, this time on Supreme Court Justice Samuel Alito.

Following are links to these articles, as well as other mentions and links to his most recent books:

** The Quiet Man: Experts sound off once again on Justice Thomas’ Silence ABA Journal, May 1 (** References to Rossum’s book on Clarence Thomas)

** Clarence Thomas, Originalism, and the Declaration of Independence National Review Online
March 19, 2014 (** A review of Rossum’s book on Thomas)

In Response To: Originalism and The Good Constitution: A Discussion (Rossum's commentary on the new book by John O. McGinnis and Michael B. Rappaport)
Liberty Law Blog, November 2013