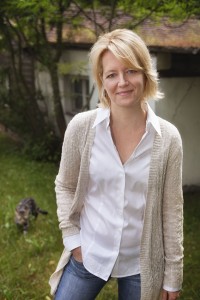 Wendy Lower's Hitler's Furies made its U.S. debut in October 2013, and was a finalist for the 2013 National Book Award for nonfiction. Lower is the new director of the Center for Human Rights Leadership at CMC.

National Book Award-nominated author Wendy Lower, John K. Roth Professor of History and George R. Roberts Fellow at Claremont McKenna College, began her tenure this month as the director of the College’s Center for Human Rights Leadership. She succeeds Professor Edward Haley, who directed the Center during a dynamic period of growth and oversaw its evolution into a vital campus hub for human rights education and activism by involving more students in an expanding, international internship program.

When Professor Haley assumed the director’s post in 2008, the Center offered only 7 internships; today, the Center is supporting 21 interns this summer who are working in a variety of areas, including helping Syrian refugees in Jordan, bringing medical equipment to Cameroon, assisting with the White House Initiative on American Indian & Native Alaskan Education in Washington, D.C., and editing briefs issued by Human Rights Watch in New York City.

Founded in 2003 by Professors John Roth and Jonathan Petropoulos, the Center aims to instill in students an understanding of human rights as central to moral conduct and ethical decisions in their personal lives, in their careers, and in the public arena. The Center promotes human rights globally and locally through public advocacy, practical, real-world experiences for students through internships, and participation in task forces and research. The Center also has given priority to advancing scholarship in the study of human rights, Holocaust history, and genocide studies.

The author of Hitler’s Furies: German Women in the Nazi Killing Fields, a 2013 finalist for the National Book Award, Professor Lower looks forward to bringing her energy and experience as a program administrator, government advisor, scholar, and teacher in the fields of Holocaust, genocide, and human rights history and activism to the role of Center director.

In the coming year the Center will continue to sponsor internships and develop competitive student research fellowships. The Center will organize several campus programs, including the launch of an exhibit on the Great War, a Friday night film series and documentary film prize for students, and a memorial program to mark the 100th anniversary of the Armenian genocide. Center-sponsored speakers at the Athenaeum will cover topics such as big business and the Holocaust, the Cambodian genocide, women’s rights, and sexual violence around the globe.

As the new director, Professor Lower plans to collaborate with other faculty who are teaching and conducting research on human rights. She would like to focus on expanding CMC’s course offerings to attract more students to the human rights sequence and deepen their knowledge of the history of human rights and ongoing violations. Professor Lower is committed to helping students develop the scholarly expertise and professional skills necessary to prepare them for graduate work and occupations related to Holocaust research and education, genocide prevention, and human rights.