Experts in Microeconomics Hosted at CMC for 2013 SoCCam Conference 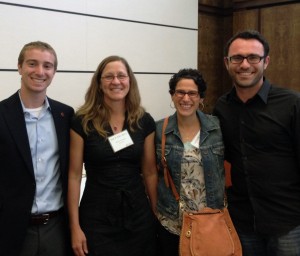 Dozens of economists gathered at Kravis Center’s Freeberg Forum on April 19 for the 2013 Southern California Conference in Applied Microeconomics (known as SoCCam). The event was organized by Heather Antecol, CMC's Boswell Professor of Economics, and was sponsored by the Lowe and Berger institutes, and the Robert Day School. SoCCam began as a tradition at the University of California, Los Angeles (UCLA), and CMC began hosting the conference in 2010, after state budget cuts limited the university's funding for the event. This is the first time it was actually held on CMC's campus.

In short, SoCCam is an annual forum for Southern California’s top experts in the field of applied microeconomics to present, review, and discuss research and papers on everything from labor economics to urban economics.

As a junior majoring in international relations, attending the extremely technical sessions elicited a mix of feelings. At times, the terms used were so far beyond my scope that I felt I was being addressed in a foreign language. Yet, thanks to a class in intermediate microeconomics, I was able to understand the some of the methodologies that went into the research. It was abundantly clear that the approaches were complex and even divisive among those present. Throughout each presentation, the speaker was grilled by other experts in the audience. Following this, a discussant, who had previous studied the presenter’s material in detail, would trade places with the speaker and critique specific areas of the presenter’s methodology and/or argument. As frightening as this sounds, however, the mood in the room was more inquisitive than critical. And while the audience was cautious about ceding too quickly or easily to the presenters’ findings, overall the evidence they exhibited held up well to the scrutiny, and also led to some surprising conclusions.

During the session on education, for example, labor economist Kate Antonovics from the University of San Diego’s department of economics, discussed the effect of Prop 209 on student composition at California’s state universities. Her analyses of several pools of data suggests that the, “admission advantage lost by URM [Under Represented Minorities] after Prop 209 was restored through race-neutral changes to the admissions process.” That is, the shock of the ban on affirmative action was softened by steps that some UC’s swiftly took to guarantee that students from tough socio-economic backgrounds would still be accepted. These measures included giving more weight to high-school GPAs and family background, over SAT scores. The discussant, CMC Associate Professor of Economics David Bjerk, expressed that although economists are usually critical of papers, Antonoics’ research was well-done, and her findings were highly relevant for those interested in the effects of affirmative action.

The event’s keynote speaker was Hilary Hoynes, a professor of economics at UC Davis, and co-editor of the American Economic Review. Her presentation,“The Health Impacts of the Non-health Safety Net," showed the implications of the publicly funded food-stamp program on the poor’s economic self-sufficiently and ‘metabolic syndrome,’ a group of health indicators.

Hoynes remarked that because the system is universal, the program’s effects are especially hard to study. Yet by using complex data analysis, she showed just how much the program matters, especially when made accessible during certain time frames. She noted, for example, that it has the most impact on health measures when it affects children below the age of three. And since the level of poverty is the highest among children (approximately 4.7 million of them live in poverty), this shows the importance of the food-stamp program. In addition, it significantly adds to the self-sufficiency of women. In sum, her results have led her to the conclusion that the benefits of the non-health safety net are broader than generally thought.

By bringing together seasoned experts to evaluate the methodologies behind current research, SoCCam contributes to making these and other endeavors in applied microeconomics more productive, accurate, transparent, and legitimate. Therefore, in giving micro-economists the incentive to use their skills to tackle real questions, CMC is instrumental in advancing this field. And the benefits of their research are accrued by us all.