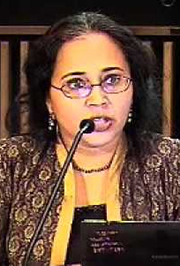 CMC's Aseema Sinha understands that scholarly tendency.  As a political scientist, Sinha has devoted much of her career to an examination of tangled issues of politics and law in that country of 1.2 billion people, birthplace of four religions—Buddhism, Hinduism, Jainism, and Sikhism— and home to the world's fastest-growing telecommunications industry.

Such a diverse landscape means that "social and political processes unfold unevenly across countries as diverse as India," Sinha explains in "Scaling Up: Beyond the Subnational Comparative Method for India" just published in Studies in Indian Politics. The article is one of two recent publications by Sinha, who is CMC's Wagener Family Associate Professor of Comparative Politics and George R. Roberts Fellow.

Such an uneven national landscape explains why scholars tend to "move to the subnational and lower levels of analysis," she explains.  But in her new article, she argues that scholars must apply their analysis to the big picture as well as to the smaller ones.  "It is only when we take our subnational or city- or district-based insights and scale up," she argues, "that we will have a sense of the larger picture."

Sinha's other new publication, which has been downloaded more than 55 times in the past three weeks, is "State Transformation and the Role of Lawyers: The WTO, India, and Transnational Legal Ordering" for the Social Science Research Network.

Such quick, high public response to Sinha's article has resulted in the SSRN including it on its Top Ten Download List in the area of culture studies.

Sinha's article looks at the dynamics of the relationship between India and the law of the World Trade Organization, including the increasingly important role of Indian lawyers in this interaction.  What Sinha finds is that this relationship is far more reciprocal in its influence than some might suspect.