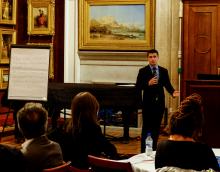 Mining operations are growing in sub-Saharan Africa, bringing both prosperity and challenges to the region. A Claremont McKenna College student found himself presenting on the subject alongside some of the world’s leading experts on the mining industry at a conference in London.

CMC’s Model United Nations team won both individual and group awards at its first two conferences of the spring semester. 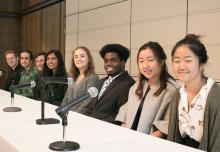 During her first year at Claremont McKenna College, Becky Chung ’20 wondered how the changing global climate would affect her hobby of mountaineering. 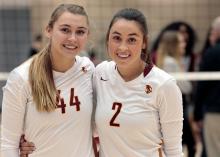 For Clara Madsen ’18, the close of the NCAA tournament this week will not only mark the end of her college volleyball career, but also a chapter in her family’s story.

For two seasons, Madsen and her sister Phoebe '20 have played alongside each other for Claremont-Mudd-Scripps, which defeated Gustavus Adolphus in the NCAA Division III quarterfinals Thursday in Grand Rapids, Mich.

The Madsen sisters have played volleyball together since their high school days in Santa Barbara. They reunited on the court and on campus last year.

CMC’s Model United Nations team had back-to-back victories in its first two events of the school year, winning at conferences at Georgetown and USC and boosting its national profile.

This morning the Trump administration announced that it will rescind the executive order Deferred Action for Childhood Arrivals (DACA), effective six months from now. The U.S. Congress is expected to work on legislative framework before DACA status would expire for individuals on March 5, 2018.

The College held its annual Convocation, which officially begins the academic year at CMC. For the class of 2021, the ceremony marks the beginning of a years-long journey that will end with graduation.

“You’re standing on the precipice of a new freedom,” Rabbi Daniel Shapiro, Chaplain of The Claremont Colleges, said in his invocation. “Academic freedom to pursue your interests and freedom to structure your work-time and social activities.” 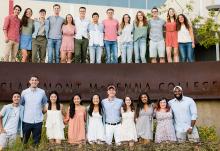 Strong leaders have a profound impact and inspire people to make a difference in the lives of others. For the current class of CMC resident assistants (RAs), their own RAs played a range of impactful leadership roles: mentor, friend, and big brother or sister to name a few.

“The RA role is an amalgamation of an older sibling, camp counselor, and friend,” Sam Peterson ’18 said. “We strive to build the inclusive residential communities we value at CMC, while being a support system for students outside the classroom.”