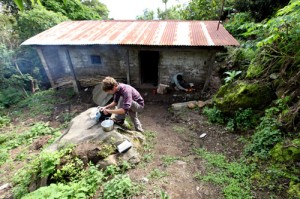 That was Variety’s headline on April 26, which talks about the duo’s use of Hulu––now through May 3––to amp up the fight against global poverty. The digital channel is airing their documentary “Living on One Dollar” for free through Friday, May 3, as part of Earth Day activities.

What would it be like to live without clean water, little food, and poor shelter? These questions and more would be answered, with the hopes of bringing worldwide attention to the realities of global poverty and effective microfinance.

“It was an amazing opportunity to learn for myself what it really means to live on under one dollar a day,” one of them states. “Which, coming from this (privileged) reality, I can’t say I had any idea … ”

If you happened to catch actor Ben Affleck’s Tweet on Earth Day, April 22, you might already know there’s a connection in these efforts. Ingrasci and Temple’s Living on One nonprofit has joined efforts with Global Poverty Project’s “Live Below the Line” campaign this month. Participants like Affleck are challenged to live on just $1.50 a day for food and drinks, for five days.

(Read our winter 2013 CMC cover story on Living on One, online.)