A distinctive
feature of social and
cultural life at CMC 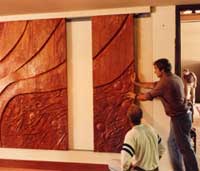 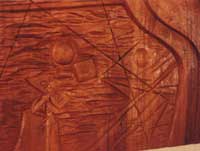 Kansky, born in Nice, and raised in Paris, France, attended the Applied Art School and the Ecole des Beaux Arts in Paris. He traveled to the south of France, studying and working. He created his first figurative lacquer in 1950 and had his first one man show in Paris in 1951. He then traveled to Italy and Morocco and in 1954 married Helga Monson, a ballerina of the international company Grand Ballet du Marquis de Cuevas. From 1955 to 1960 he worked as art director for Lever Brothers in Paris. During this period he studied the writings and philosophy of French writers Andre Malraux and Louis Pauwels which shaped his thinking about his present work.

The basic idea of his work is the "sacred relationship between man and the elements- the cosmos, thus: rocks, crystals, meteorites, skies, water, earth." Using a lacquer technique developed by the Chinese, de Kansky works with architects for use of his massive murals and mosaics in new buildings. "I am a painter by education, but work in lacquer because I wish to be obliged to more discipline; also I am seeking the poetry and magic which are in the world of reflections. Alchemy--working with silver, copper, acids--is appealing to me."

"'Totem' and 'ikon' are important words in my art because they materialize thought."

In 1976 Kansky started translating those concepts in wood. He has done work for some of the largest architectural firms in the country and his work has been exhibited at museums in Pasadena, Paris and New York as well as showings in many other cities. Jae Carmichael, director at Pacificulture says of Kansky: "Beyond the fact that igor de Kansky is a superb craftsman using an unusual and difficult technique at a time which many artists have discarded craftsmanship, he is also a deeply sensitive artist making a statement in today's terms."

Kansky works in Sierra Madre, and is also represented by the Valley House Gallery in Dallas.

"The basic idea of the Athenaeum carving came from previous work I painted; of curves which you might call shock-waves or bodyshapes, with what I call echo-forms, a repetition, but not identical, evolutionary, creating a sense of motion, yet stable. I was curious to see as to how they translate in 3-D."

"Basically the large wavy shapes were to be smooth and semi-smooth, the rest heavily textured."

"As I drew the life-size pattern, more ideas came in--of round shapes--smooth in the midst of chaos-sort of cosmic, skies, etc. Fortunately, I bought 2" deep planks which allowed me later to carve much deeper. The wood was cut and glued by Jim Ipekjian of Pasadena, a fine wood worker. Each section weighed between 80-100 pounds--a total of 1,200 pounds of Honduras mahogany-of which one half was carved out.

"After transcribing the main design on the planks, I went on digging with abandon, but in wood carving as opposed to stone, you have to cut out the wood; it does not fall away."

"Thus the problem of organizing the chaos--not easy--it has to have some shape."

"I used a pneumatic hammer, Italian, with Swiss gauges to remove the bulk of wood and went over carefully with hand gouges for the final shape. The work progressed and suggested new shapes--new depth--up and down, line here and there, more depth, more familiarity with the wood--all the while listening to OP. 131, 135, 133, etc., for inspiration, and sharpening tools. When I arrived at the end, the left side, I found out that I had more depth, more shape, was better than the beginning, so I worked over the right side."

"The frog is a triple pun, for fun, that I am the only one to understand, OP. 131 is for you to find out and appreciate, the square and circle, an old theme, finally revealed its mystery in all its glory."

"I'm indebted to Hadju and Noguchi: sculptors, masters of bumps, and all the artists who preceded me."

"My thanks to CMC for the opportunity."