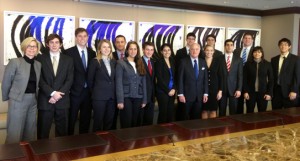 In January, the Financial Economics Institute sponsored the 10th annual New York City Networking Trip. During the last week of winter break, 10 juniors, two sophomores, and two senior trip coordinators traveled to New York City to learn about the world of finance and connect with CMC alumni of all ages.

The 2013 trip marked the fourth year that students took the lead in organizing the experience. Viken Douzdjian ’13 and Rachel Kitzmiller ’13, both participants last year, were the student coordinators and responsible for all aspects of the trip, ranging from organizing firm visits to conducting mock interviews for the students in preparation for their networking.

The week began on Monday, Jan. 14, with a cocktail reception hosted in absentia by John Shrewsberry ’87, executive vice president and group head of Wells Fargo Securities, at Wells Fargo’s New York office. Students interacted with CMC alumni working in the field of finance, including members of the Financial Economics Institute Board of Advisors and Associate members. Following the reception, the group enjoyed dinner at Sarabeth’s restaurant.

Tuesday morning kicked off a series of firm visits beginning at RBC Capital Markets with Robert Wetenhall ’94, a director in equity research. Mr. Wetenhall spoke to the students about the importance of firm culture and finding a job that fits one’s skill set. A panel of young analysts gave the students a view of their day-to-day role at RBC. The panel included recent graduates David Ulrich ’12, who works in the investment banking division, and Kevin Potterton ’12, who works in equity research. (Mr. Potterton helped coordinate the 2012 NYC trip in his senior year.)

Following the visit at RBC, the group made their way to Goldman Sachs to meet with alumni in various divisions of the bank. David Alvillar ’01 spoke to the students about his career path from CMC, and his experiences on various trading desks at Goldman. Fellow alumni Christine Huk Mann ’87 and Andrew Cosentino ’11 provided insight on the wealth management industry, structured products, and how certain divisions of Goldman Sachs collaborate to meet the needs of the bank’s clients. Peter Michelsen ’99, Holly Poole M’11, and Saumya Lohia ’12 spoke about their roles in the investment banking division of Goldman Sachs. The students also had the privilege of hearing from Andrew Kaiser P’13, member of RDS Board of Advisors and COO of Goldman Sachs Bank.

Fred Alger welcomed the group for their final visit of the day. Kevin Collins gave a presentation on Fred Alger’s “dynamic growth” investment strategy. This visit was of special interest to the many trip participants who are also members of CMC’s Student Investment Fund. Following the presentation, the group was given a tour of Mr. Alger’s vast art collection. This was the first time the New York Networking Trip had the opportunity to visit him, and it served as valuable exposure to the investment management industry.

Wednesday morning began with a visit to Deloitte Consulting. Chase Gray ’12 and India Mullady (SCR ’11) arranged for Kevin Rose, a partner who focuses on financial services strategy, to speak with the students about his experiences at Deloitte, and what differentiates the firms from their competitors. Mr. Grey and Ms. Mullady organized a panel of five analysts to speak to the group about working in the consulting industry.

After a quick photo with the Wall Street Bull, the group made their way to Deutsche Bank where the group was hosted by Alan Delsman ’68, a managing director in credit risk management. He was joined by Chief Risk Officer Rich Ferguson ’81, and analysts Zain Jamal ’10 and Kaitlyn Desai ’11. (Ms. Desai helped coordinate the 2011 NYC trip in her senior year.) This visit provided students the unique opportunity to learn about the role of risk management in an investment bank, but they were also privy to hear from several members of the investment banking division at DB, including Esther Kim ’09.

For their final Wednesday visit, Doug Petersen ’80, president of S&P, arranged for the group to visit S&P Ratings. Although Mr. Petersen was unable to attend the visit, Dimitri Sedov, head of global digital marketing, spoke about sovereign ratings issues. He also fielded questions regarding the turbulence S&P faced during the financial crisis and the regulatory pressures they face in present day. The students also spoke with a recruiter who discussed employment opportunities at S&P.

After three informative firm visits during the day, the students spent Wednesday night at the Cornell Club, connecting with young alumni from across the greater New York area.

The final day of activities––Thursday––started with a visit to KKR, hosted by Henry Kravis ’67. The group gathered in a boardroom overlooking Central Park and listened to Mr. Kravis’ view on the global economy and private equity industry. After some final advice on how to successfully navigate life after CMC, the group took a photo with one of CMC’s most notable graduates.

The next host firm was Atalaya Capital Management, arranged by Ivan Zinn ’96. Although Mr. Zinn was unable to join the group during the visit, Josh Ufberg gave the students a primer on the world of hedge funds and private equity, with insightful information about the distressed debt investments that have become Atalaya’s specialty. The panel also fielded questions regarding their career paths and the unique challenges of Atalaya.

The group next visited BlackRock, hosted by founder Rob Kapito. Mr. Kapito spent his time with the students discussing the founding of BlackRock, the origins of their collegiate culture, and broad career advice for the students. Following Mr. Kapito’s discussion, one of BlackRock’s campus recruiters, Ahmadu Gidado, organized a networking reception with various BlackRock investment professionals. During the networking reception, the students mingled with analysts and learned about the company’s various career paths.

For their final visit of the trip, students headed back to midtown to visit Morgan Stanley, in the heart of Times Square. Scott Ashby ’95, managing director, hosted the group on the capital markets trading floor. Alongside Mr. Ashby sat a group of young alumni from all divisions of the firm. They were available for a conversation about their roles at MS and the transition from CMC to the world of professional finance. Laura Jileta M’11 spoke about the debt capital markets group, while Yuchen Zhang ’10 represented investment banking, and Ben Kraus ’11 shared his experiences on the trading desk.

The 2013 New York City Networking trip was a resounding success. It was not easy to fit 10 firm visits into three days––a new record for the trip––but the variety of companies visited, and the many different functions explored within those firms, was an educational experience unlike many others.