Are wrongful convictions more frequent among Black Americans? In their article, “What Can DNA Exonerations Tell Us About Racial Differences in Wrongful Conviction Rates?” CMC economics professors David Bjerk and Eric Helland focused on “one set of convicts for which we know innocence with certainty—those who were convicted for a crime but later exonerated via DNA evidence of innocence.”

Quincy Brown ’19 came of age on Alberta Street—a historically Black Main Street in his hometown of Portland, Ore. He biked and took the bus there as a kid. Proudly visited his grandmother’s house nearby. Showcased his art at the Alberta Street Fair. It “was and still is the cultural center of my northeast Portland neighborhood,” Brown said. 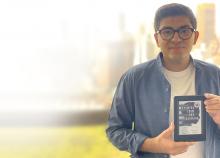 Inspired by conversations she was having in May about police brutality and killings of Black Americans, Sobechukwu (Sobé) Uwajeh ’22 knew she had to take action. On the lookout for literature to educate others about racism, she posted to her Instagram account a “starter kit” of recommended books about how to be an anti-racist.

Hailey Wilson ’22 saw Uwajeh’s post and immediately and enthusiastically texted her with another idea - they should start an anti-racist book club at CMC.

Ibram X. Kendi would like to banish the term “not racist” from our vocabulary. The historian, scholar, and writer said it is important for people challenging inequities to actively become antiracist and not merely “not racist.” The reason, he said, is that progenitors of racist ideas have always self-identified their ideas as “not racist.”

For Anoush Baghdassarian ’17, this summer is a double-header (and we’re not talking baseball). Among the select group of fellowship winners from the College this year, Baghdassarian won — and accepted — two awards: a Humanity in Action Fellowship (HiA) and a Davis Projects for Peace fellowship.

This past weekend, some 275 Holocaust scholars and survivors from around the world gathered in Claremont for the biennial Lessons and Legacies XIV, the largest conference of experts on the Holocaust. Hosted by Claremont McKenna College and CMC’s Mgrublian Center for Human Rights, the program ran from November 3-6. This marked the second time CMC has hosted the conference in its history.