For the third year in a row Robert Day Scholars at CMC practiced pitching senior executives (who also happen to be CMC alumni) in a “Pitch Day” workshop that is designed to give students the opportunity to develop and practice all-important presentation skills that they will use early in their careers.

Last month (Jan. 10-15), a group of 20 CMC students participated in the 11th Annual Evans Information Technology Advisory Board (ITAB) Networking Trip to Silicon Valley. It was a chance for the CMCers to “grin and grab” with some of the tech industry’s elite movers and shakers and, at the same time, make connections that could really pay dividends in the future.

And they made the most of the opportunity.

The weather might have been wet in January during the Pacific Northwest Networking Trip to Portland, OR and Seattle, WA sponsored by the Robert Day School of Economics and Finance at CMC. Nonetheless, it was also “raining” connections for the group of students that participated in the event, which was inaugurated in 2013 with a networking trip to Seattle. 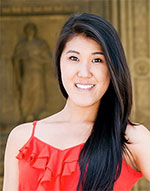 Hannah Oh, a December CMC graduate with a degree in government, called for federal budgetary reform in an article in The Hill's Congress Blog this week.

The following is taken from a January 20 story on Elizabeth Wydra '98 by Tony Mauro in The National Law Journal:

The liberal Constitutional Accountability Center is set to announce Wednesday that Elizabeth Wydra, its longtime chief counsel, will succeed founder Doug Kendall, who died in September, as president.

With 162 games during the regular season (not including Spring Training and postseason), a front office career in Major League Baseball is a grind, even if it’s just for one season. Dean Taylor ’73 worked in professional baseball for 40 years and has watched between 7,500 and 8,000 games for teams he has been involved with.

Teachable moments from distinguished panelists were on the agenda at the latest Dreier Roundtable (DRt); a half-day conference held last Friday in the Kravis Center and the Marion Miner Cook Athenaeum.

The Roundtable convened a group of policy experts, politicians, academics, journalists and professionals who focused on the topic: “Examining the Roots of Polarization in Our Constitutional Order.”

The following is an announcement from President Hiram Chodosh:

I would like to update you on two related, exciting changes regarding the Office of Alumni and Parent Relations.