Calligraphy is the art of beautiful, stylized, and elegant handwriting or lettering with pen or brush and ink. It involves the correct formation of characters, the ordering of the various parts, and the harmony of proportions. 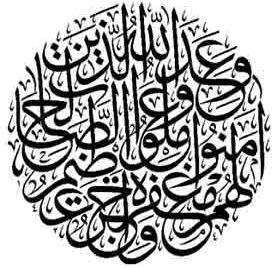 The script called Ruq'ah (small sheet), evolved from Naskh and Thuluth. Although Riq'a has a close affinity with Thuluth, Riq'a developed in a different direction. Riq'a became simplified. The geometric forms of the letters are similar to those of Thuluth but are smaller with more curves. Riq'a is rounded and densely structured with short horizontal stems, and the letter alif is never written with barbed heads.

Riq'a was one of the favorite scripts of Ottoman calligraphers. Even later, Riq'a was revised by other calligraphers and went on to become the most popular and widely used script. Today, Riq'a is the preferred script for handwriting throughout the Arab world.

Deewani script is an Ottoman development. The script was largely developed by the accomplished calligrapher Ibrahim Munif in the late 15th century from the Turkish/Persian Ta'liq.

Deewani also developed into an ornamental variety called Deewani Jali which also was known as Humayuni (Imperial). The spaces between the letters are spangled with decorative devices, which do not necessarily have any orthographic value. Deewani Jali is highly favored for ornamental purposes.

Kufi was the dominant priestly script in early times. It was created after the establishment of the two Muslim cities of Basrah and Kufah in the second decade of the Islamic era (8th century A.D.). The script has specific proportional measurements, along with pronounced angularity and squareness.

With its glorious geometrical construction, and because it was not subjected to strict rules, Kufi could be adapted to any space and material. Calligraphers employing it had virtually a free hand in the conception and execution of its ornamental forms. 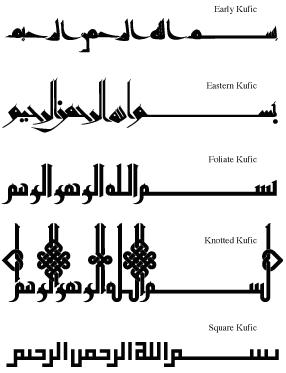 Naskh was one of the earliest scripts to evolve. Naskh was reformed into an elegant script worthy of the Qur'an -- and more Qur'ans have been written in Naskh than in all the other scripts together. Since the script is relatively easy to read and write, Naskh appealed particularly to the general population.

Naskh is usually written with short horizontal stems -- and with almost equal vertical depth above and below the medial line. The curves are full and deep, the uprights straight and vertical, and the words generally well spaced. 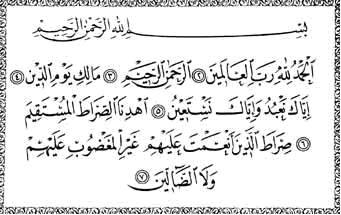 Ta'liq (hanging) script is believed to have been developed by the Persians from an early and little known Arabic script called Firamuz. Ta'liq is also called Farsi, and has been in use since the early 9th century.

The word Nasta'liq is a compound word derived from Naskh and Ta'liq. Ta'liq and Nasta'liq scripts were used extensively for copying Persian anthologies, epics, miniatures, and other literary works -- but not for the Holy Qur'an.

Thuluth script was first formulated in the 7th century during the Umayyad caliphate, but it did not develop fully until the late 9th century. The name means 'a third' -- perhaps because of the proportion of straight lines to curves, or perhaps because the script was a third the size of another popular contemporary script. Though rarely used for writing the Holy Qur'an, Thuluth has enjoyed enormous popularity as an ornamental script for calligraphic inscriptions, titles, and headings. It is still the most important of all the ornamental scripts.

Thuluth script is characterized by curved letters written with barbed heads. The letters are linked and sometimes intersecting, thus engendering a cursive flow of ample and often complex proportions.

The Art of Arabic Calligraphy